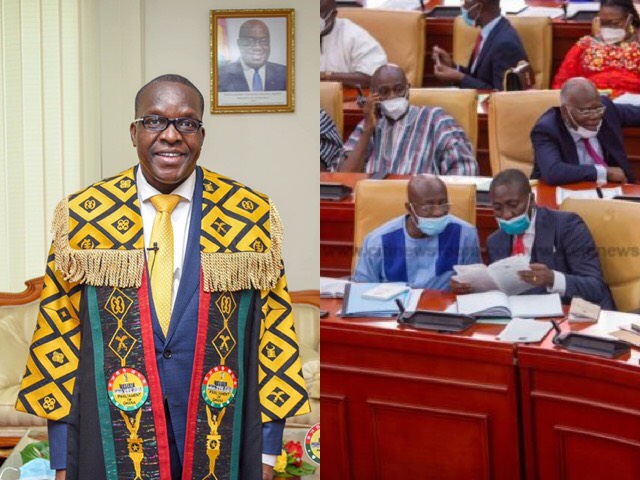 Speaker of Parliament Rt. Hon. Alban Kingsford Sumana Bagbin has objected the comments made against him by Effutu MP Alexander Afenyo-Markin over the way he handled the sitting to consider the E-levy bill.

Mr Bagbin said Afenyo-Markin asked him to show leadership in Parliament, a comment he judged as attacking his personality.

Speaking to state broadcaster, Ghana Television (GTV) on Thursday December 30, Mr Bagbin said what transpired in the House was not something everybody is happy with.

He said “It is something that we are all not proud of. Even though we know that before you can eat the egg you have to break the shell but you don’t want to go though it yourself. You think that you have learned the lessons of those parliament, I have a way of talking more, building consensus than exchanging fire. This is building confidence in the democratic system, it is a great achievement and I hope we will build on this.

“When I left he wasn’t on the floor. How can you now, lead your team to now be attacking me and say that I should lead. In fact one of them said I should learn how to to lead. It is because the level of leadership I am at , he doesn’t understand it, that is someone who claims to be my son, the Honourable Member for Effutu, the Deputy Majority Leader, Honourable Afenyo-Markin. You come and you personally attack me then you come to the House and you expect that we should have that sprit of consensus building. Things don’t work that way.”

The Majority Leader Osei Kyei-Mensah-Bonsu and Alexander Afenyo-Markin, who is deputy condemned the Speaker over the way he conducted himself during the parliamentary sitting on the E-levy proposal.

Kyei-Mensah-Bonsu had expressed disappointment in him over the way and manner he conducted himself in Parliament on Monday December 20.

According to him, the Speaker left Parliament to his home without communicating to the Second Deputy Speaker whom he handed over to.

He described this as unfortunate.

Speaking to journalists on Tuesday December 21, the Suame lawmaker said “He said he will come here at 11: 30 , subsequently another message came to say that he can only be here at 12. I mean, the house cannot be held to ransom by one person. It is most unfortunate.

“Yesterday leaving the seat he told the First the First Deputy that he was handing over to, that he will come back pretty soon and all that we heard was that he had left to his house, that is mots unfortunate without any further communication to the Second deputy Speaker or to me because I have been having some discussions with him and I am told today, that he didn’t even have any discussion with the Minority as well so where are we going from where. It is most unfortunate development.”

The Majority Leader said the adjournment of the sitting on the e-levy would afford the Majority and government more time to do further consultations on the proposal.

“I think that this will also allow us sometime to have further consultations among ourselves, it is the reason why the First Deputy Speaker had to adjourn the House sine die. As you know, the budget has been passed , there was an attempt to portray that that there is no budget, there is a budget , the appropriations bill passed.”

He added “I think that this will also allow us sometime to have further consultations among ourselves ,it is the reason why the First Deputy Speaker had to adjourn the House sine die . As you know, the budget has been passed , there was an attempt to portray that that there is no budget, there is a budget , the appropriations bill passed.”

On Monday December 20 Members of Ghana’s Parliament could not hold their emotions as some exchanged brawls in the House just before the final vote on the controversial Electronic Transfer Levy Bill, also known as e-levy.

The sit-in Speaker, Joseph Osei-Owusu, had announced that a division would be followed to approve the Bill, presented under a certificate of urgency, and he was going to vote as well in his capacity as a Member of Parliament.

That appeared to have provoked the National Democratic Congress (NDC) members, who questioned his decision to vote after presiding over the night’s proceedings.

They moved to the front of the dais, issuing threats at the Bekwai MP.

This got the Majority MPs to also start agitations and immediately Mr Osei-Owusu handed the presiding role to the Second Deputy Speaker, Andrew Amoako Asiamah, the fight broke out.