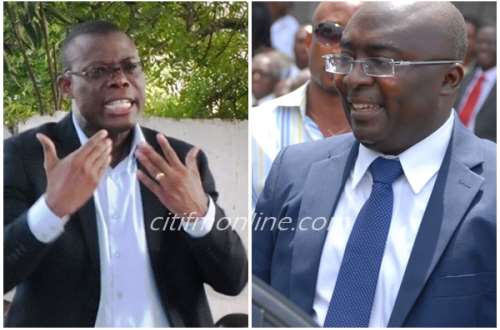 Former Deputy Finance Minister, Transport Minister, Food and Agric Minister Fiifi Kwetey says the the Akufo-Addo-Bawumia-led Administration is insensitive to Ghanaians after impossing some taxes in the 2020 Budget and Economic Policy Statement presented to Parliament Wednesday by Ken Ofori-Atta.

According to the former Ketu South Lawmaker, the NPP’s promise trumpeted by Dr. Mahamudu Bawumia in opposition to move Ghana from taxation to production, fizzled into thin air upon assumption of power.

He noted that after winning political power, they have reneged on that promise to introduce what he calls humongous taxes on Ghanaians.

The rebuttal by Fiifi Kwetey follows the decision by the NPP Government to impose tax on mobile money and other digital transactions in the budget statement for the 2022 fiscal year.

Finance Minister Ken Ofori-Atta announced a new levy to be charged by government in 2022 on all electronic transactions to widen the tax net and rope in the informal sector.”

“It is becoming clear there exists enormous potential to increase tax revenues by bringing into the tax bracket, transactions that could be best defined as being undertaken in the ‘informal economy’,” Ken Ofori-Atta observed on Wednesday, November 17 as he presented the 2022 budget statement in Parliament.

“After considerable deliberations, government has decided to place a levy on all electronic transactions to widen the tax net and rope in the informal sector. This shall be known as the ‘Electronic Transaction Levy or E-Levy’.”

This will, however, not affect transactions that add up to GH¢100 pr less per day.

“A portion of the proceeds from the E-Levy will be used to support entrepreneurship, youth employment, cyber security, digital and road infrastructure among others.”

This new levy is scheduled to start Saturday, January 1, 2022.

In 2020, total value of transactions was estimated to be over GH¢500 million with mobile money subscribers and users growing by 16 percent in 2019.

According to a Bank of Ghana report, Ghana saw an increase of over 120 percent in the value of digital transactions between February 2020 and February 2021 compared to 44 percent for the period February 2019 to February 2020 due to the convenience they offer.

This was definitely heightened by the advent of Covid-19 especially during the lockdown.

Speaking in interview with TV3 on this development, Fiifi Kwetey who is also former Member of Parliament for Ketu South said “You don’t have a government that runs to power on the mantra that taxation is the lazy man’s approach to governance. A government that says you are moving the country from taxation to production and then you come into office only to slap these humongous taxes on ordinary people.

“For me, it is callous, it is wickedness, it is insensitive and above all, it is hypocritical and that is the challenge that this country faces especially with Bawumia.

“As far as I am concerned he is the embodiment of deception, somebody who absolutely should not desecrate the high office of the land and if he has any consideration of running for the highest office of the land he better think twice and step aside because this country deserves better.

“You are talking about a group that spoke against taxation and for you to do what you have done is the level of immorality that this country has degenerated into.