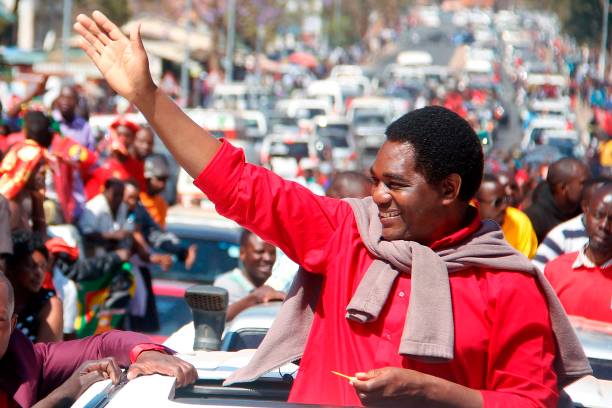 Zambia’s President Hakainde Hichilema has paid off all the retirees, farmers, Council and Tazara workers, increased salaries for civil servants by 12%, implements free education from primary to secondary, paid farmers, shot up Constituency Development Fund from K1.6 million Kwacha to K25.7 million and this money has been already released.

The UPND government led by President Hichilema is also set to recruit over 30000 teachers and 11000 health workers. The recruitment exercise is a 2022 plan only. This implies that in the second year of 2023, the New Dawn Administration will make outstanding positive strides that will joyously shock everyone because no government in Zambia or indeed in Africa has crazily performed like the one in Zambia in just months of being in office.

It is important to anchor the point that Zambia’s President Hikainde Hichilema was sworn in on the 24th of August 2021 after landslide victory with over one million votes margin against incumbent President and his long-existing political rival Dr. Edgar Lungu.

We will closely monitor developments in Zambia and we will keep the world posted on the handsome performance of this Zambian president.

In what could best be described as five conservative times of perseverance,
Zambia’s Hakainde Hichilema (HH) contested for presidential elections multiple period and lost but presently he’s relaxing in gleam of notable win.

Zambian President Hakainde Hichilema is laughing in the gleam of his noteworthy success in 2021 political race during his first visit to the United States as president.

The dictatorial development left Zambians in dismay and talking without explanation from government.

With government unilaterally taken off social media on election day without giving any reason for the most strange action, Zambians were left in anxiety as to why this was happening in democratic Zambia.

That was the first time that the social media platforms have been absolutely shutdown on the day of general elections.

In view of that, most Zambians had to resort to the use of the VPN to keep in touch in the situational reports from polling stations.

The then opposition leader HH had to defy all odds to win after prison custody with treason charges reffered to as political witch-hunting and five times contest for the presidency.

HH’s landslide victory reminded the world of the popular dictum that progress is always a good mark of man.

Historically, it has emerged that on Thursday, HH turned into the first Zambian President to visit the White House since 1992, an uncommon lifetime honour many presidents clamour for.

His victory over President Edgar Lungu who suffered humiliating defeat in last election was “majority rules system in real life,” his host US Vice President Kamala Harris said, while sharing recollections of her visit to Lusaka when she was 5 years of age.

The two leaders traded triumphant stories and praised each other for their individual decisions.

“We also were conveyed by individuals of Zambia in a generous manner under truly challenging conditions with the vote based space not being accessible,” he said to gestures from Harris.

Hichilema’s excursion in Washington has additionally incorporated a gathering with the World Bank and International Monetary Fund heads as he attempts to ride the flood of global regard for haul his country out of an obligation emergency and secure financing for a financial recovery.

“Defilement was escalated under the then Zambia’s President Lungu, common liberties were disregarded, and vote based system was truly dissolved. So he needs to handle the economy as well as leave on political change.”

Hichilema is covering off seven days of firsts in the wake of conveying his lady discourse at the United Nations General Assembly in New York as the Southern African country’s seventh president.

“The result of our political race was dictated by the individuals who vote, and not the people who count the votes,” he told a socially removed lobby of audience members in the early evening Tuesday, alluding to his monstrous triumph over Lungu.

It was near 2 a.m. back in Lusaka however some at home kept awake to watch and many complimented him when the message of the discourse was posted on his Facebook page.

Allies of Hakainde Hichilema eliminate a banner of previous President Edgar Lungu from a shaft in Lusaka, on August 16, 2021.

Last month’s serene political progress was a motivation to the remainder of African mainland, Hichilema said, repeating the US President’s acknowledgment of vote based system in Zambia in his own discourse prior in the day.

“It lives in the youngsters of Zambia – who tackled the force of their decision in favor of the initial time – turning out in record numbers to censure debasement and graph another way for their country,” President Joe Biden had said in his own first location to the Assembly.

President Hichilema was making a buzz even before he got to New York. Rather than the rich official planes and enormous escorts liked by numerous African designations, he flew business on Qatar Airways and carried with him only two pastors.

An assertion said he kept the group “lean and useful to be more useful and practical.”

Bally, as his allies call him, styles himself as the CEO of Zambia Limited. At the UN, he said his administration’s need was to “reestablish macroeconomic strength, accomplish financial and obligation maintainability and advance monetary development.”

He has made another service of Green Economy and Environment to handle environmental change and is looking into the nation’s money rich mining area.

“Things should be possible better, and we mean to improve for individuals that put us in office,” he revealed to CNN’s One World show before he left for the US. “It’s an authority question, ensuring that we regard constitutionalism, majority rule government and its orderly guidelines; and to make Zambia an encouraging sign for vote based system in Africa.”

As resistance pioneer, Hichilema was even imprisoned for 100 days for treachery for supposedly imperiling Lungu’s life by declining to give way for his escort. He lost two decisions to Lungu that he accepts he won yet is pushing ahead. He grins when the inquiry comes up.

“We have a great deal of energy, yet it won’t be squandered on vengeance, requital or without a doubt, any adverse indecencies,” the president told CNN. “We realize what was fouled up against us and who did what however we’re not here to vindicate. In the event that we did that, it implies that we don’t possess any higher ground than the people who did that to us.”

Zambia turned into the main African nation to default on its obligation during the pandemic and President Hichilema presently says he’s in chats with its loan specialists for a potential bailout.

“Our message to the worldwide monetary local area is that we’re here to work together. We regard the obligations that are there and we’ll cooperate to emerge from this obligation emergency that Zambia has ended up in,” he said.

Hichilema crushed active President Edgar Lungu in an avalanche by very nearly 1 million votes in his 6th effort to become head of Zambia.

It was a shocking turnaround for the African politician known as HH went through a while in jail in 2017 for what were broadly seen as politically persuaded treachery charges. The charges were dropped under extraordinary worldwide tension.