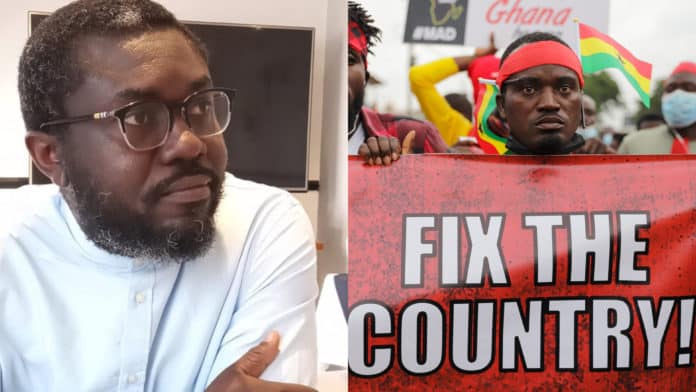 “Though I am a postgraduate law student at the University of Cambridge, England, I have no fixed place of abode any place outside of Ghana”, #FixTheCountry Convenor Oliver Barker-Vormawor has challenged Attorney General’s argument that the accused should not be granted bail on grounds that he is a flight risk.

Convener for #FixThe Country Movement, Oliver Barker Vormawor, has told the Tema High Court that he is not a flight risk as was put forward by the Attorney General in its affidavit in opposition to his bail request.

Barker-Vormawor indicates that though he is a postgraduate law student at the University of Cambridge, in England, he has no fixed place of abode outside of Ghana

Additionally, he states categorically that he has a fixed place of abode in Accra where has lived, contrary to the AG’s claim.

“That though a postgraduate law student in the University of Cambridge, England, I have no fixed place of abode there or any place outside of Ghana.”

“That, rather, I have a fixed place of abode in Accra, Ghana, where I live,” the affidavit states.

In his affidavit in reply to the AG’s affidavit in opposition to his motion for bail pending trial, Oliver Barker per his Counsel, Dr. Justice Srem-Sai of the Praetorium Solicitors further indicates that contrary to the AG’s claim, he personally led the police to his house in Accra on February 17, 2022, for the purposes of executing a search warrant from the courts.

Lawyers for Oliver Barker Vormawor were expected to move a motion for his bail pending trial at the Tema High Court on Thursday, March 10, 2022.

However, they asked for a short adjournment from the Court to study the Attorney General’s affidavit in opposition which was filed on Wednesday, March 9, 2022 and served on them in Court on March 10.

Per the affidavit in opposition deposed to by an Attorney of the Office of the Attorney-General, Anastacia Karimu, the AG indicates that the applicant has no fixed place of abode within Ghana thus making him a flight risk and per the nature of the offense and the punishment which conviction will entail, he is not likely to appear to stand trial if granted bail.

Also, the state disagrees and denies all averments contained in the applicant’s affidavit in support of the application and indicates its opposition to the motion for bail pending trial.

Further, it notes that per investigations, the applicant has since 2021 been inciting his social media followers to effect by an unlawful means the overthrow of the constitutionally elected government through a number of Social media posts.

Moreover, it states that the applicant’s conduct revealed a systematic pattern to incite his social media followers into accepting his endeavor to usurp the constitutional organs of Government.

Additionally, the AG notes that contrary to paragraph 7 of the applicant’s affidavit in support, evidence gathered so far by the police can sustain a charge of Treason felony.

Furthermore, it indicates that the applicant has not been cooperating with the police and that he had denied the Police access to his phone despite an order of the District Court.

Also, the AG states that the applicant has no fixed place of abode within Ghana thus making him a flight risk and per the nature of the offense and the punishment which conviction will entail, he is not likely to appear to stand trial if granted bail.

In addition, the Attorney General notes that investigations are not yet concluded, and by the applicant’s conduct, he has shown that he will interfere or hamper investigations if granted bail thus prays the court to refuse the application for bail pending trial.

The Tema High Court has meanwhile adjourned the bail hearing to Monday, March 14, 2022, for the applicant’s counsel to move the motion for bail pending trial.