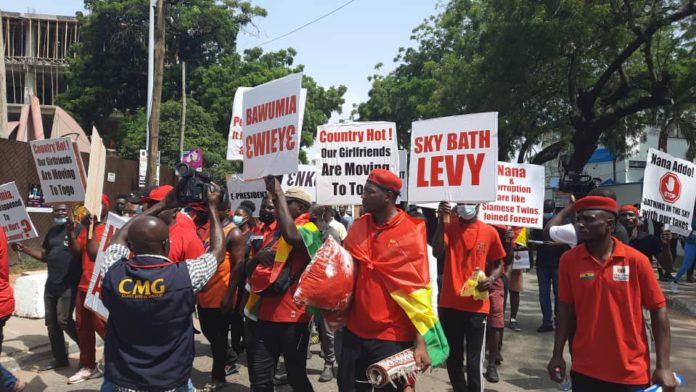 The principal streets of Accra were painted red as ‘Justice 4 Ghana’ protestors hit the Ghana’s capital, Accra matching in protest of the proposed 1.75% tax on mobile money and other digital transactions (E-Levy) by the government.

Known as ‘Justice 4 Ghana’ demontration, the anti-momo protest was led by the former Chairman of the People’s National Convention (PNC) Bernard Monah.

Clad in red, the ‘disgruntled’ protestors held placards with the inscription; country hot! our girlfriends are moving to Togo, Bawumia 3wiey3, sky bath levy, Nana Abr3 among others, the anti-momo Levy demonstrators insisted they must be permitted to enter the inner perimeter of Parliament to present their petitions to MPs but refused they will never do so outside the forecourt of the lawmaking house.

Finance Minister, Ken Ofori-Atta announced the 1.75% on mobile money and other digital transactions during the 2022 budget presentation on Wednesday, November 17, 2021 at Parliament.

According to the Finance Minister, Ken Ofori-Atta who presented the government’s budget statement in parliament, the e-levy seeks to increase tax revenue for the country.

Ghana has been struggling to meet its annual revenue targets.

He noted that the statement was occasioned by the surge in mobile money transactions during the Covid-19 pandemic of 2020.

According to him, the total transactions for 2020 were estimated to be over ¢500 billion compared to GH¢78 billion in 2016, just five years ago.

His announcement has sparked controversy in the country with the Minority in Parliament declaring they will resist the implementation.

The latest demontration by ‘Justice 4 Ghana’ is to put intense pressure on the governing party to immediately withdraw the e-levy.

Mr. Mornah had earlier explained the plan was to march through the Central Business District to parliament, but after discussions with the police, there was consensus to converge at the Efua Sutherland Children’s park.

They will then move to occupy parliament and stay there until the e-levy is rejected.

Meanwhile, minority in parliament has filed fresh motion to annul the ruling by the first Deputy Speaker.