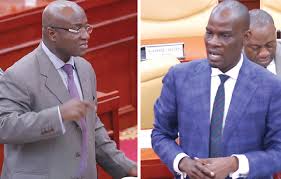 It has emerged that Ghana’s Parliament has rejected 2022 Budget Statement and Economic Policy presented to the lawmaking house by Finance Minister Ken Ofori-Atta after heated debate between Majority and Minority MPs.

The decision was reached after Majority Caucus of Parliament staged a walkout.

The Speaker of Parliament Rt. Hon. Alban Kingsford Sumana Bagbin adjourned proceedings for 5 minutes before returning to the chamber after which the budget was rejected.

Taking decision on the budget, the Speaker made it clear that “a walkout does not mean proceedings should be suspended”.

Parliament has adjourned sitting to Tuesday 10am.

Below is a statement issued by the Speaker Bagbin today after the budget was rejected:

Minority Caucus of Parliament remains unwavering as they pressed on for total rejection of 2022 Budget Statement and Economic policy of government until review of certain components including controversial 1.75% mobile money tax and and other digital transactions.

But their NPP majority counterparts are fighting back the opposition, defending that the budget holds the key to Ghana’s transformation agenda, arguing that total rejection will absolutely deprive Ghana of the desired development needed in crucial times after Covid-19.

Both NDC-Minority and NPP-Majoriry in parliament have locked horns on the approval or otherwise of the 2022 Budget Statement and fiscal policy of government.

Winding up debate on the statement as presented by Finance Minister Ken Ofori Atta, Minority Leader, Haruna Idrissu made a case on behalf of his side for a rejection of the budget particularly so because of the introduction of a 1.75% and other digital transactions levies. He noted that the momo tax will hamper Ghana’s drive towards a digitalised economy.

He also added that neglect of the burning problems facing Ghanaians including tidal waves at Keta in the Volta Region calling on government to adequately resource the works and housing ministry to live up to its mandate.

Meanwhile, Speaker of Parliament Alban Bagbin says the time for consultation with Parliamentary leadership before crafting the 2022 Budget although laudable is too late.

In this article:2022 Budget: NDC and NPP MPs,lock horns,over approval