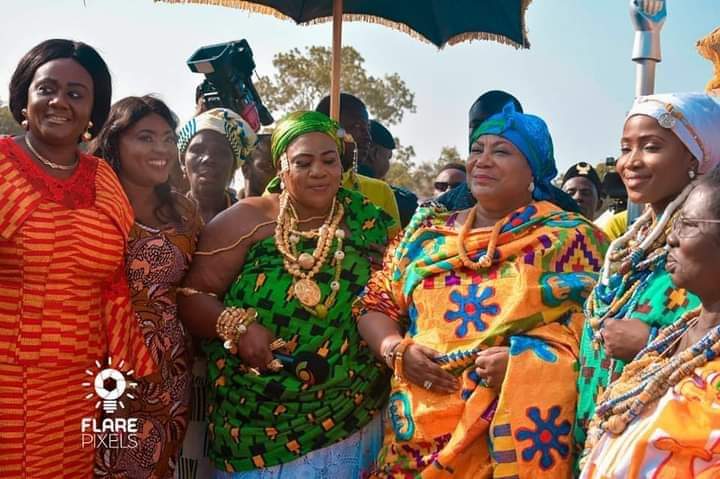 Background
Each Traditional Area of Ghana is identified with a special cultural festival which distinguishes her people from the other areas.

The Asafotufiami festival of the people of the Ada Traditional Area in the Ada East and Ada West Districts of the Greater Accra Region is a rich cultural heritage celebrated annually around the first week of August. It is mainly in remembrance of the invaluable achievements of the Founding Fathers and Ancestors, especially in the many wars of survival and development of Ada. The Dangme expression of Asafotufiami simply means company or Divisional

Firing of musketry.
Therefore Asafofufiami is essentially a war Festival that commemorate the heroic achievements of our ancestors, some of whom bravely spilt their blood to save Ada from being overrun and destroyed by the various enemies of those days.
It is pertinent here to mention a few of those ancient wars and battles.
(i)1750: The battle of Nonobe – Ada-Anglo war, Adas supported by Akwapim, Akim Abuakua Krobo and Agave Anglo was defeated.
(ii)1769: Again Ada defeated Anglo.
(iii)1770: Unsuccessful invasion of Anglo by joint forces of Ada Akim Abuakua, Akuapim, Krobo and part of Mafi while Akwamu supported Anglo.
(iv)1776: Anglo attacked Ada and burnt down the Township.
(v)1826: Kantamanso War near Dodowa against Asanti attack of Accra and coastal all areas. Ada was invited by King Taxis of Accra, marched up to Kantamanso village near Dodowa to join Gas, Danes and other allies Asanti defeated.
(vi)1876: Glover war Adidome Captain Glover led the allied forces from Ga, Ada, Krobo, Krepi, Akwapin, against Anglo supported by Avenos, Mafi defeated Anglo and allies defeated in battles of Adidome Avenor and wheta.

Welcome of Surviving Warriors
At the end of end of each war surviving warriors who returned home were met at the outskirts of the outskirts of the town by joyous townsmen and relatives and carrying them shoulder high to their respective homes amidst various merry making activities. A day was appointed for a State welcome ceremony featuring returnee warriors gorgeously dressed and decorated in beads etc, drumming and dancing merry making climaxed by a march through the town to the Volta Riverside for a ritual of musketry firing into the river and general feet and hand washing to send way evils of war and suffering. The day end with companies or divsions returning home amidst general jubilation of course warriors who fell at the battle had their due share of Honourable mention in libation and prayers and other mourning activities especially by relations.

Conduct of the Asafotufiami Festival
With the fortunate cessation of these inter-tribal/ethnic wars and hostilities thanks to Europeans intervention, especially British Colonial Administration. Adas now have occasion to welcome back home warriors returning from battle. But those who fell at battle must live in everlasting memory for having sacrificed themselves for the survival of their native Ada. Not must Ada forget the wars that cost us the lives of such eminent people. All these and those who returned alive from the war must have a mention of honour at least occasionally in the life of Ada.

For these and other laudable reasons, Adas decided from the beginning of the 20th century to adopt and adapt the practice of ceremonial welcome of the Returnee warriors of old into yearly festival for all sons and daughters of the Ada state. The main activity would be musketry firing by the Divisions or companies led by their respective Asafoatseme (war captains) in line with our traditional military organization. This ceremony was embraced and christened “Asafotufiami Festival” meaning Divisional musketry firing festival in commemoration of the war, the fallen warriors and the survivors.

Asafotu Planning Committee
The Paramount Chief in council (Dzetse of Ada) appoints a festival planning committee well ahead of August for tentative planning of the main activities of the festival including details of finance, programme, Publicity, Special invitees, participating bodies/Associations.

Main Activities ceremonial Arrivals
On the first Thursday in August (as decided) all Adas start arriving from their various places of stay to their respective homes in Ada. Elders at home perform purification and rituals of various sorts in the main family houses. Feast of cow, sheep, goat, fowls, etc, welcome the arrivals on Thursday.

Announcement by main war drums
At early dawn on Friday, the two main Asafo war dances of Akofode and Asorkor parade through town drumming, yelling and singing the war songs. They visit the residence of the war captains and stage the war dances.

Display at old battlefield “Aplenaver”.
In the morning on Friday all the divisional clans in an orderly procession on the principal street amidst musketry firing, drumming, singing of war songs and dancing to cheer the leadership of their respective Asafoatseme (war captains) onto an old field called Applenayer at luhuese, a little way from the main township. Here young men display musketry firing on serious war fashion (against imaginary enemies) amidst continued drumming, yelling and dancing, till early afternoon when the priests pour libation and the companies return to greet the Paramount Chief seated at Lenobinya to welcome his people from the battlefield ritual at Kpomkpombanya.
From Lenobinya the company continues the procession to Kpomkpompanya (the riverside were the main ancient warriors departed to war by boat and landed on their return from war). At this riverside libation is poured, musketry is fired over the water of the river Volta and ritual of feet/hand washing is done to wash away all evil of war etc. for the Volta River to carry into the vast Gulf of Guinea of the endless Atlantic Ocean: the evils to go, never to return to Ada any more. After this ritual the clans return home in the evening to prepare for the main festival Durbar on the following day.
Main Asafotufiami Festival Durbar Saturday is the climax of the Asafofiami Festival. All road lead to the main Durbar ground at the Presby Middle School Park. Everybody comes out in the best attire affordable. The Asafoatseme and the Divisional Chiefs or Wetsoyihi also are carried high in palanquins riding in the middle of the Groups gorgeously dressed, usually in native Kente or native war attire (Asafoatseme) raising wearing their usually glittering hands in response to the waving and cheering. The long procession of the ten clans move slowly with drumming and dancing and musketry firing to the Durbar ground.

Ada Youth Organization
Each Traditional clan group is led by one of the many Adaa youth groups formed in big Ada and other towns in Ghana.

Exchange of Greetings
The invited Guest of Honour usually a representative of Government exchange greetings with the Paramount chief and participating Association and group around the Durbar Ground. The Paramount Chief returns the greetings. Then follow Traditional libation and Christian prayers, procession, welcome addresses, etc.

Oath Swearing
The most important function at the Durbar Ground is Annual oath swearing by Asafoatsenguame to the Paramount Chief renewing their allegiance to serve the state and the Paramount Chief whenever he called upon them to do so. The oath is by the ancient wars of Katamanso, Adidome Hogba and Tordzenya.

Riverside Sports
Main activities close with riverside sporting activities at Kpomkpo-panya featuring.
1.Tug of peace competition among the women of the Associations.
2.A canoe race The festival games are usually sponsored by various companies.
Free activities

In this article:2022 Ada Asafotufiam,Festival launched