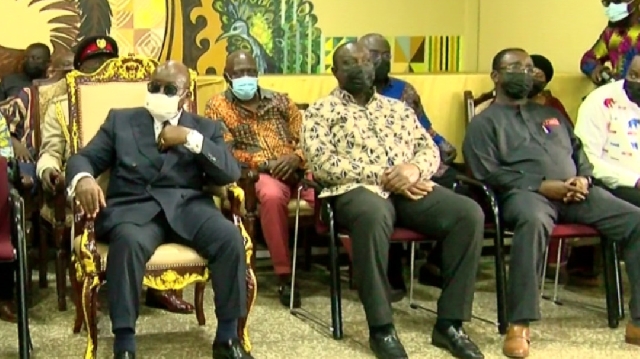 Residents of Atwima Boko on Saturday demonstrated against the contractor working on the Atwima Boko and Nweneso stretch within the Atwima Kwanwoma District of the Ashanti Region.

The project which started in 2019 was expected to be completed in two years.

In November 2020, Roads and Highways Minister Kwesi Amoako Atta paid a visit to the project and promised that the will be fixed upon complaints from chiefs of the area.

The demonstration took place when President Akufo Addo inspected the 15.2km Kwadaso road stretch as part of his 4-day tour of the region.

Upon President Akufo-Addo arrival, residents blocked the road for hours whilst demonstrating over the broken promise.

According to the disgruntled residents, the contractor, Asabea Engineering Ltd, abandoned and left the site and only returned to work on Friday upon hearing that the President will be inspecting the road.

They fear the project will not progress if the president leaves.

“If the contractor says Akufo-Addo has not paid him, let him not return upon the president visit. This deplorable nature of the road is negatively affecting economic activities.

This led to the decision by the residents to stage a protest to register their displeasure about the slow pace of the project.

The aggrieved residents said the deplorable state of the road is affecting business activities in the area.

They, therefore, want the President to terminate the contractor’s contract and award the road to a more competent contractor.

Meanwhile, the Managing Director of Asabea Engineering, Samuel Ofori Larbi said “He is waiting for approval of Asphalt to complete the road”.