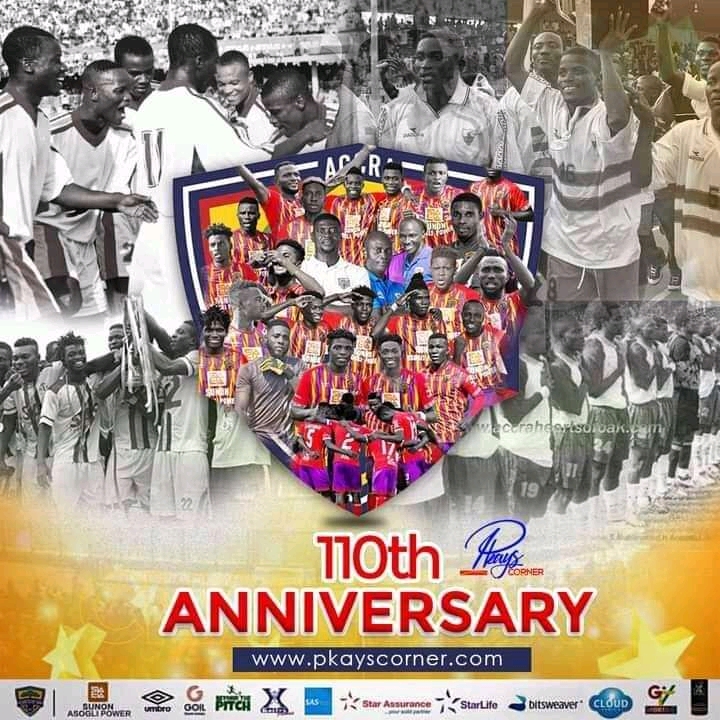 The oldest existing club in Ghana, Glorious Accra Hearts of Oak is 110 years today, a milestone worth celebrating.

The club has outlined plans on how they will mark the day and their vision going into the future.

On the 11th of November 1911, Accra Hearts of Oak was founded, it is the oldest surviving football club in Ghana. Hearts traditional colours are red, blue and yellow, which many refers to as Rainbow colours.

During the colonial era, the governor of the Gold Coast at that time, Sir Gordon Guggisberg came up with a football league among the Accra-based club dubbed Accra Football League.

In celebration of 110
anniversary, Hearts can bost of many international and local laurels. They have won their local league on 21 occasions, the FA cup a record 11times and 3times super cup champions.

Internationally, they have won African Champions League once, Confederation cup, and a super cup. They were nicknamed Continental Club masters because of their exploit in Africa, especially in the 2000s.

Hearts of Oak is among six elit clubs in Africa that have won treble. In the year 2000, Hearts won the domestic league, FA Cup, and ultimately conquered Africa to win the CAF Champions League for the first time.

In the same year, they were ranked among the best clubs in the world. A popular television network in the world, CNN ranked Hearts as the 8th best team in the world.

This year’s anniversary is unique because after 10 years without a major trophy, the current crop of players broke that jinx and won the league and FA cup trophies which automatically guarantees them super cup.

Management of Hearts has issued a statement and outlined how the day will be marked and also the vision of the club in subsequent years.

They will begin the celebration by paying homage to the founding fathers and those who have sacrificed their lives to put the club to where it is today.

The club reiterated their commitment of making Hearts an infrastructure hub, which will help them produce young and talented players that will help the club and the nation at large.

They have also urged all phobians to register to become active members by joining the Phobiaforlife initiative, by sampling dialing *389*1911#.

They also used the opportunity to call for unity, among the rank and file of the club, since it’s one of the tools that can help the clubs win laurels and achieve greatness.