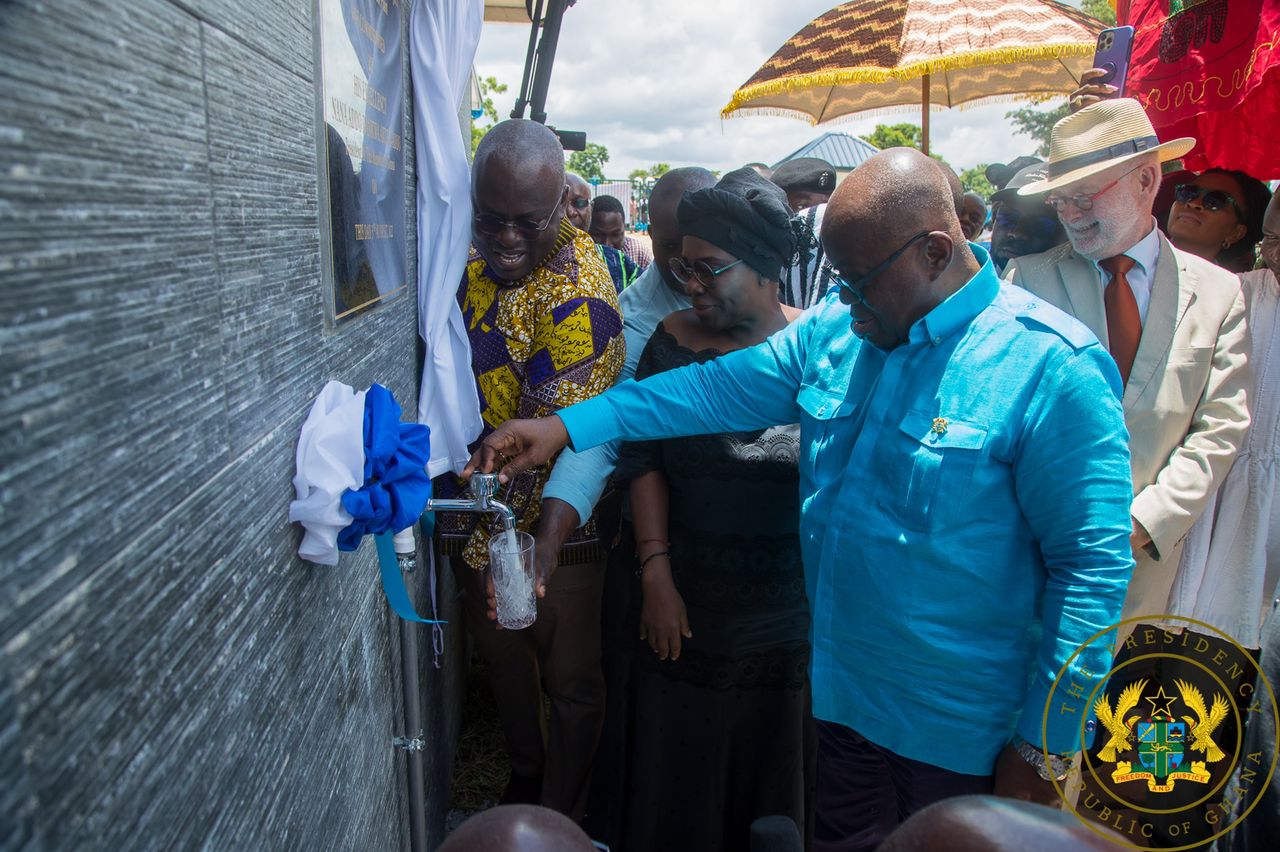 The the full statement

The President of the Republic, Nana Addo Dankwa Akufo-Addo, on Friday, 5th August 2022, commissioned the €37.6 million Upper East Region Water Supply Project, as part of his tour of the Upper East Region.

According to President Akufo-Addo, “the Upper East Region Water Supply System will provide the people of Bolgatanga, Navrongo, Paga and its environs with twenty thousand, five hundred (20,500) cubic metres of water per day, which is approximately four and half million gallons (4.5 million) of water per day, a three-fold increase from the 1.5 million gallons a day originally available to the Region.

It will be recalled that in January 2018, Government, through the Ministry of Finance (MoF), secured funding to the tune of €37,683,266, consisting of a €12,341,308 grant from the Netherlands Government, and a €25 million facility from ING Bank, also from the Netherlands, to implement the Upper East Region Water Supply Project.

Following on from this, the Ministry of Sanitation and Water Resources, together with the contractor, DENYS NV, structured the project into two phases, with the aim of increasing the design horizon from 2030 to 2040, to make adequate provision for future demand in line with our policy to construct water projects taking into consideration future population growth.

“Apart from Bolgatanga, Navrongo and Paga, communities such as Zuarungu, Zarre, Sumbrungu, Kalbeo, Gambibigo, Winkogo, Bongo, Yorogo, Pungu and Akomkongu are also set to benefit from the project. Three hundred and forty-seven thousand, four hundred and forty-six people, in total, will be served with safe, potable water,” the President said.

He told the gathering that the execution and completion of the Upper East Water Supply Project falls in line with the programme of Government to achieve the target, set under the United Nations Sustainable Development Goal 6, of ensuring the availability and sustainable management of water and sanitation for all.

President Akufo-Addo reiterated Government’s commitment to creating an enabling environment, through the provision of social infrastructure, that will attract businesses to communities.

“Accordingly, I expect that, with the availability of potable water in this area, investors will take advantage of Government’s Flagship Programmes, such as “One- District, One-Factory”, to establish small and medium scale enterprises to create employment for young people, so as to stimulate the growth and development of the domestic economy,” he added.

He told the gathering that Government is working diligently to provide funds to improve the water supply situation in other parts of the country, with the objective of ensuring equity and an improved quality of life to all communities in the country.

President Akufo-Addo also revealed that processes have started to develop Phase Two of the Kpong Water Supply Expansion Project, which will augment the supply of water to the people of Greater Accra.

He urged inhabitants of the beneficiary communities in the Upper East Region to help to maintain the water infrastructure, “so we can continue to have access to potable water and, through that, ensure the general well-being and health of all the respective communities.”

President Akufo-Addo thanked the Netherlands Government for the considerable financial support for the project, through its ORIO funding, and also acknowledged the great contribution this project will have in the urban water supply delivery to the people of the Upper East Region.