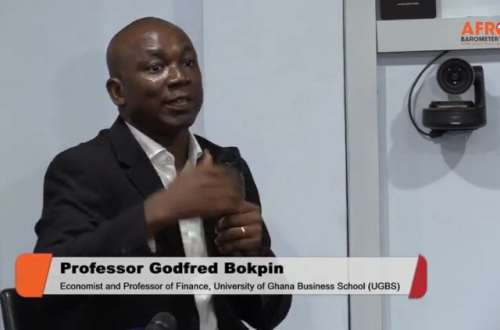 University of Ghana Business School’s (UGBS) Economics and Finance Professor Godfred Alufar Bokpin has asked Vice President, Dr Mahamudu Bawumia, to resign if he is not given the free rein to run the economy.

According to Prof Godfred Alufa Bokpin, it appears the Vice President lacks enough influence and control over the affairs of the Economic Management Team.

For this reason, the economist wants him to “take the bold decision” and resign in order to preserve his integrity.

“I sympathise with the Vice President. He is always at the face of the NPP’s economic engineering engine, we were told. I believe that if he had enough control maybe things would not be like this,” he said.

“If the Vice President feels uncomfortable about his role as the Chair of the Economic Management Committee and lacks the influence, he should resign. It would serve him better [and] the reason I’m saying so is that it will help him maintain his integrity. He has to take the bold decision,” he added.

He made the remarks in an interview monitored by African Editors on Friday, 15 July, after the Vice President’s address on Thursday, July 14.

The Vice President, during the address at the Accra Business School, outlined four major factors that have caused the country to seek a bailout from the IMF.

The Professor, however, believes that the country’s economic woes are not only attributable to the aforementioned factors.

“Since independence that we’ve been to the fund, we never gathered the courage to admit that we brought this upon ourselves. What we have successfully done is embark on a blame game. So in all our visits to the fund you can identify both internal and external weaknesses such as corruption, wastefulness, borrowing spree (for internal) and the external factors also come,” he said.

He added that the failure of successive governments to implement policies proposed as part of the economic recovery plan after our previous exit from the IMF has largely contributed to the country frequently asking for help from the fund.

“As part of the exit conditions, we promised the IMF and ourselves certain reforms that we were going to implement that will prevent us from going to the fund. We had them on paper and speak eloquently to [the IMF officials] but in the end we missed out on the details and the lessons got missing as well,” he said.

“Until we see concrete steps, structural reforms, productivity-enhancing reforms, forget it. [Ghana will continue to visit the IMF,” he said.