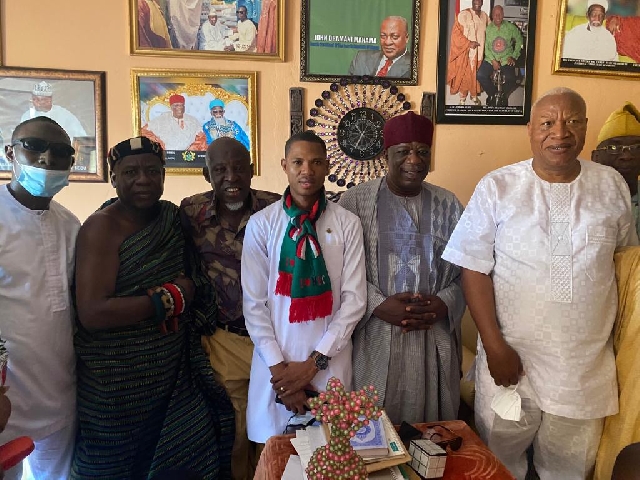 Be resolute until momo tax is scrapped- Prof. Alabi to NDC MPs

2020 Campaign Manager of NDac Professor Joshua Alabi has tasked Minority Caucus of Parliament to remain unwavering until the tax on mobile money and other digital transactions proposed in the 2022 Budget and Fiscal Policy of government is absolutely scrapped.

According to him, the E-levy if approved by the the lawmaking house, will worsen alredy unbearable hardships on Ghanaians.

Prof Alabi, made the call when he met with some traditional leaders of Madina within the Greater Accra Region to express heartfelt thanks on behalf of Ex-President John Dramani Mahama, the NDC flagbearer in the 2020 general elections who is far away the Gambia to observe crucial presidential polls of AU Member State.

The UPSA former Vice-Chancellor before embarking on the 2020 campaign, they had sought the blessings and support of the chiefs and, so, it was proper to come back and thank them, especially because the NDC won Madina and the Greater Accra Region.

He added that it was refreshing to note that the Member of Parliament (MP) for Madina, who is on the ticket of the NDC, defeated the NPP’s candidate in the last election while the NDC’s flagbearer widened the gap between him and the NPP’s.

According to him, an NDC-led administration would have ensured a booming economy with jobs for the droves of unemployed young people in Ghana today.

He said the NDC had a strategic blueprint to create millions of realistic jobs and assured the chiefs that in 2025, if Mr Mahama takes up the mantle of leadership of the country once again, Ghana will be brought back on track.

Prof Alabi appealed to the chiefs to continue praying for Mr Mahama and the NDC so that the 2024 elections would be a clear one-touch victory for the former president and the party.

The Member of Parliament for the area, Mr Francis-Xavier Sosu, also thanked the chiefs for their unwavering support and assured them that he will fiercely fight for the constituency to benefit from the national cake.

The NDC’s Constituency Chairman for Madina, Mr Abdul Rahman Rahim, assured the chiefs that they will continue to give their unflinching support to the MP to achieve the vision he has for the constituency.Prof. Alabi contested NDC flagbearership race ahead of 2020 Election but secured second position after John Mahama and accepted to the Campaign Managing job, a tasked that produced 137 seats for the NDC as against 137 seats for the governing party, NPP.