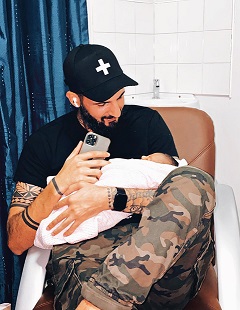 DJSky took to social media to announce the arrival of the baby which has received a lot of congratulatory messages from well-wishers and fans from across the globe.

DJSky has also released new viral music named after his newborn, Milagros featuring Ken & Seth music and has garnered over 10 million views across all digital platforms.

DJSky also received a massive international feature and endorsement as he partners Spotify to promote his music at the famous Times Square in New York beginning of this year.

DJSky’s music is available on all digital music platforms. To be candid, you can’t resist his works.

DJSky married his longtime girlfriend Rasha, at an intimate ceremony with friends and family in October 2020.