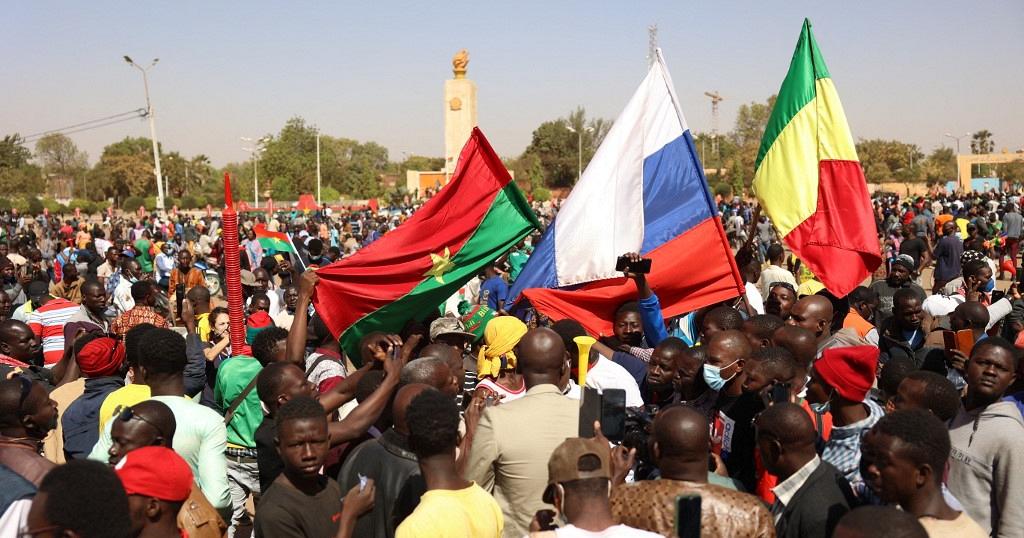 Demonstrators gather in Ouagadougou to show support to the military while holding and waiving a Russian flag on October 25, 2022 aftermath of the coup d’etat in Burkina Faso

The Economic Community of West African States (ECOWAS) has been partly blamed for the current unrest in Burkina Faso and other parts of the Sahel region in recent months.

In an interview with Executive Director for Africa Center for Security and Counter-terrorism Emmanuel Kotin says ECOWAS is becoming dysfunctional in the discharge of its duties.

“They need to have a second look at its role within these countries. They need to engage more, they need to dialogue more, the need to strengthen their governance and security institutions and they don’t only need to act when situations of this nature happens because they don’t happen out of the blues.” Mr. Kotin He said.

Soldiers in Burkina Faso on Monday January 24, announced on state television that they have seized power following a mutiny.

The president was arrested and detained at the Sangoulé Lamizana barracks, along with the head of parliament and ministers, according to security sources.

Before this attempted coup in Burkina Faso, there had been successful coups in Chad, Mali, Guinea and failed military takeovers in Niger and Sudan.

“If care is not taking, the ECOWAS region risks the tsunami of Coup d’Etat…and what ECOWAS and the AU at large is trying to do is to impose none effective sanctions, what they need to do is to engage more with the government and listen to the concerns of the people.” Mr Kotin said.

A study by two US researchers, Jonathan Powell and Clayton Thyne, has identified over 200 such attempts in Africa since the late 1950s. About half of these have been successful.

“There should be a strategic plan, if the foreign occupations really want to help the local forces to be able to fight these terrorists and the best way to go is to build the local security forces… by training them and giving them the tools to deliver the training. “ Mr Kotin explained.

Burkina Faso has been struggling with jihadist attacks since 2015, when militants linked to Al-Qaeda and the Islamic State group began mounting cross-border raids from Mali.

More than 2,000 people have died, according to an AFP toll.

Recent cases in the Sahel region are just few of the many coups on the continent, making it arguable the continent with the most coups.

Burundi’s history has been marked by eleven separate coups, mostly driven by the tensions between the Hutu and Tutsi communities.

Ghana has also had its share of military coups, with eight in two decades. The first was in 1966, when Kwame Nkrumah was removed from power, and in the following year there was an unsuccessful attempt by junior army officers.

But do these military take overs always achieve the necessary results?

“The military takeover is not going to solve the real driving forces off the conflict. Unemployment, lack of youth entailment to their citizenship and lack of security for the ordinary Burkinabe. “