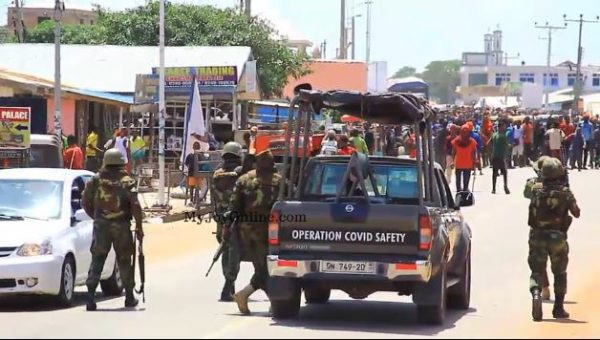 Former Secretary to David Asante Apeatu,
Inspector General of Police Peter Lanchene Tuobu has taken a swipe at the Ashanti Regional Minister Simon Osei Mensah, accusing him of usurping the powers of the police when he unilaterally deployed police and military personnel to Ejura leading to the killing of unarmed civilians.

According to him, the lack of security governance structure in Ghana on the part of political appointees who upon being appointed by President Akufo-Addo as Regional Minister, suddenly take up security roles from the police and acts as if they are security expert is problematic.

In his view, hitting the streets by unarmed Ejura residents was simply an expression of anger that must not be faced with shootings by the police and military.

Speaking in an interview monitored by African Editors on Saturday 2 October 2021 in Accra, the WA West Member of Parliament Peter Tuobu said “Ashanti Regional Minister usurp the powers of the police when he single-handedly deployed military to Ejura. How can you suddenly become a security expert because you’ve been appointed by the President ?”

Peter Tuobu noted that”Being the Ashanti Regional Minister and Chairman of the Regional Security Council, REGSEC doesn’t mean you’re the council. You’re supposed to provide policy directions and not take over powers of the police by force and deploy police at ease”.

Contributing to the debate, Fraud and Security Consultant Richard Kumadoe said “Let’s be determined to fixing what needs to be done in such security matters. For me, findings and recommendations of the Justice George Koomson-led Committee are what we already know”.

According to Richard Kumadoe, “the committee members should have been specific on the exact punishment for officers involved and I disagree with the report. It’s a bit shallow”.

“Military is a secret society and punishment prescribed by the Ejura Committee without being specific could mean transfer. That’s can’t deterrent enough to fix the future”.

Justice George Koomson-led Committee report concluded that the probable cause of Kaaka’s death may be from his family.

This according to the Director of Academic Affairs at Kofi Annan International Peace Training Centre KAIPTC Prof. Kwesi Aning, is very strange and class failure, quite ‘convenient’ to make but an error”.

Meanwhile, Communication Director of NPP Buaben Asamoah expressed shock that “The committee linked the report to the energy of the youth and unemployment. The path of violence can’t be the solution for the future? Does it mean you don’t have a job so you have to destroy”.