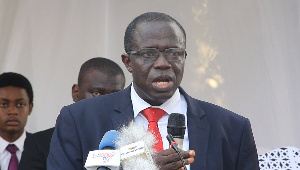 A Ghanaian, Justice Dennis Dominic Adjei has been elected as a Justice of the African Court on Human and Peoples Rights.

He will be based in Arusha Tanzania and will serve a six-year term.

The election took place at the African Union’s 41st Ordinary Session of the Executive Council held from 14th-15th July, 2022 in Lusaka in Zambia.

The African Court on Human and Peoples Rights consists of 11 judges among whom 10 were elected from the African blocks; Western, Eastern, Northern, Central and Southern Africa.

In May 2022, the African Union declared a floating seat which was occupied by Justice Marie Therese Mukamulisa from Rwanda vacant, and invited qualified applicants from Africa. A male and female were selected from each of the African blocks at the Ordinary Session of the Executive Council meeting of the African Union.

The African Union received several applications from countries and shortlisted the under listed five persons and they are:

The members of the Africa Union voted three times on the candidates after which Dennis Dominic Adjei from Ghana was number one and Pedro Sinai Nhatitima from Mozambique became number two.

The Union voted three times on the two candidates of which Dennis Dominic Adjei maintained the first position. In accordance with the African Union rules on elections, the members were to vote on Dennis Dominic Adjei for him to secure two-thirds of the 51 members of the Union who are eligible to attend and vote.

Forty-five members voted of which 41 voted for Dennis Dominic Adjei with four abstentions and was declared elected and appointed to occupy the Floating Seat for the next six years.

Ghana now has a member on the African Court of Human and Peoples Rights after Justice Sophia Akuffo, the first Ghanaian who served as a member and finally as the President of that court about six years ago.