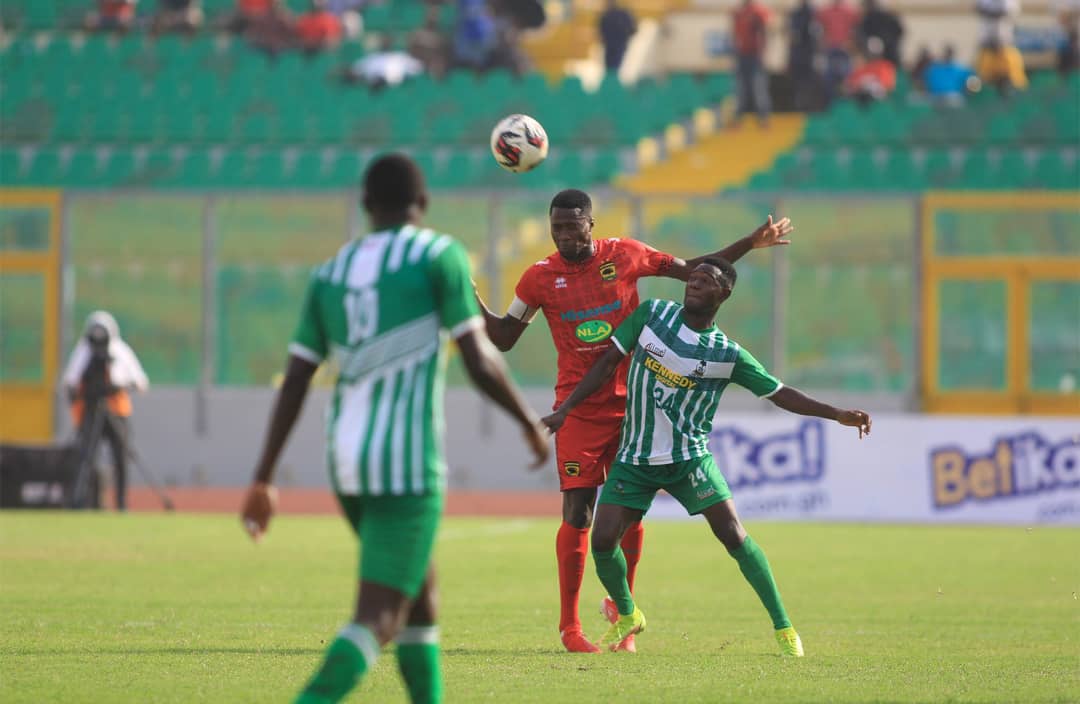 GPLWK6 Wrap: Kotoko trashed at Kumasi to break tie at the top

Kumasi derby and top of table clash between Asante Kotoko and King Faisal ended in tears for Kotoko as they were stunned by three goals to two with a hat-trick from Zubairu Ibrahim at Baba Yara Stadium.

Week 6 of 2021-22 Ghana Premier League season kicked off on Saturday with Aduana Stars locking horns with the Academy boys WAFA at Dormaa Agyemang Badu Stadium. Aduana got emphatic 3-0win over the Academy boys. Hafiz Adams broke the deadlock in the 8th minutes with a beautiful volley, before Emmanuel Gymfi doubled the lead in the 31st minutes. Emmanuel Gyamfi sealed the victory for the Ogya boys in the 70th minute to make it 3 and a brace for himself.

Accra Lions left it late to secure a vital win against Eleven Wonders at the Accra Stadium. It was a difficult encounter between the two sides, just when it was heading to a draw, Frederick Asante moment of magic in the 92rd minute secured all the three points for the Lions.

Elmina Sharks also welcomed Karela United to Ndum Sports Complex later in the day. Justice Ato Mensah opened the scoring in the 19th minute for Sharks and doubled it in the 54th minute before Mathew Kelvin Andoh got the consolation goal for Karela in the 82nd minute. It all ended 2-1 in favour of Sharks.

Five matches were played on Sunday, the League leader and the second in the table clashed in a Kumasi derby, where a hat trick from Zubairu Ibrahim condemned Kumasi Asante Kotoko to their first defeat of the season. George Mfegue score brace as it ended 3 goals to 2 in favour of King Faisal.

Accra Great Olympics played out a goalless drawn game at the Accra Stadium with Bechem United.

Dreams FC pinned down new boys Gold Stars by 2goal to 1 at Dawu with Ali Huzaf and Fatawu Isahaku before Richard Amoah got the consolation for Gold Stars.

And lastly, AshGold and Legon Cities shared a point each after playing goalless drawn at Obuasi Len Clay Stadium.

Hearts Medeama has been postponed because Hearts is representing the country in the CAF confederation cup.

King Faisal are now leveled with points(13) with Kotoko at the top.