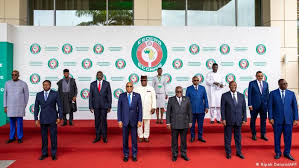 Apart from that, the coup makers have been sanctioned by the regional block. Their financial accounts are to be frozen with traveling ban imposed on them.

The decision was reached at extraordinary summit held in Accra, Ghana on Thursday 16 September, 2021.

Briefing the press after the extraordinary summit in Accra-Ghana, President of ECOWAS Commission Jean-Claude Kassi Brou said “The sanctions were imposed on the coup makers because the military takeover in Guinea is in breach of ECOWAS protocols”.

ECOWAS is also demanding immediate unconditional release of ousted President Alpha Conde from being detained, coupled with provision of quality healthcare for him.

Meanwhile, ECOWAS is raising red flags over slow pace with which authorities of Mali are carrying out the orders issued by ECOWAS to ensure peaceful transition to constutional regime.

Jean-Claude Kassi Brou expressed reservations over the slow rate at which Mali is implementing directives issued by ECOWAS.

President of ECOWAS Authority of Heads of States and Government is expected to visit Guinea as part of the transition process.

Special forces commander Mamady Doumbouya, who ousted President Alpha Conde, walks out after meeting the envoys from the Economic Community of West African States (ECOWAS) to discuss ways to steer Guinea back toward a constitutional regime, in Conakry, Guinea September 10, 2021.