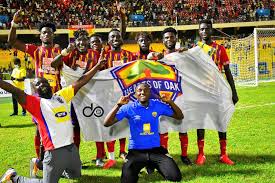 Accra Hearts of Oak this afternoon touched down in Algeria en rout to Méridja, where the second leg of the CAF Confederation cup between Phobians and Jeunesse Sportive de la Saoura is expected to take place.

The Ghanaian champions have been presented with another opportunity to redeem their dwindled image in the continental competition after they failed to progress in the CAF champions league.

The former Confederation cup champions head into the second leg with 2 goals advantage from the first leg.

Hearts of Oak are counting on the experience from the champion league game against WAC in Morocco to propel them into the money zone. But that is not expected to be serve on the plater of silver bearing in mind their absimal performance against North African sides in recent meetings.

Again, the artificial nature of the turf in the Stade 20 Août 1955 which is the match venue poses a additional challenge to the Accra based team considering their performance against teams that use artificial turf back home.

However, with good mentality and the determination to replicate the 2005 winning team in the same competition is enough motivation to surmount this hurdle.