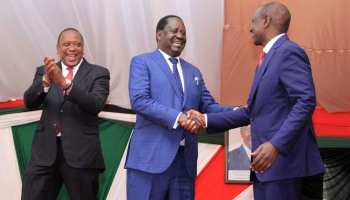 Helicopter lands in the middle of rice fields ahead of the arrival of Kenyan Deputy President who doubles as Presidential Candidate in the upcoming elections William Ruto as he seeks votes from the densely populated, politically influential heartland of Mount Kenya.

Located in the centre of the country and flanked by an extinct volcano that gives the vast region its name, Mount Kenya has long played a key role in presidential elections and this year is no exception.

As the underdog in the August 9 election, where he will face Raila Odinga, a veteran opposition politician who now has the backing of the ruling Jubilee party and President Uhuru Kenyatta, Ruto and his team know that winning Mount Kenya is crucial to his electoral fortunes.

The 55-year-old has vowed to lift millions of Kenyans out of poverty, making “bottom-up” economic growth a major plank of his campaign.

At the rally in Kirinyaga country, Nancy Njeri, a 78-year-old rice farmer, told journalists he had her vote.

“Ruto will bring changes in education, youth employment, he will ensure we have fertiliser to grow our rice, and many more things,” she said.

Kirinyaga governor Anne Waiguru predicted a huge victory for Ruto’s United Democratic Alliance (UDA) party in the region, telling Journalists that he is “someone who is accepted by the people of Mount Kenya.”

“He has done a lot of groundwork in that regard,” the UDA politician said.

Ruto, a businessman from the Kalenjin tribe who is currently serving as Kenya’s Deputy President, was originally slated to succeed President Uhuru Kenyatta.

Instead, he found himself banished to the sidelines after his boss struck a deal with arch-rival Odinga.

Embittered but ambitious, Ruto launched a new party and began laying the foundation for his candidacy, focusing in particular on the region which is perhaps most representative of the complex politics that govern Kenya.

It was a long shot for the Kalenjin leader, at least on paper.

Mount Kenya is the sacred land of the Kikuyu, Kenya’s largest ethnic group, who believe that God lives in the snow-capped volcano they call Kirinyaga.

The fertile region, home to mango orchards and coffee plantations, also occupies a hallowed place in Kenyan history — the Mau Mau rebellion against the British Empire began here in 1952.

“From that time (onwards) there is this sense of entitlement that the Kikuyus have always had,” said analyst Herman Manyora, who favours Odinga.

Nearly six decades after independence in 1963, Mount Kenya continues to be at the heart of Kenyan politics.

Three of the country’s four presidents — Jomo Kenyatta, his son Uhuru, and Mwai Kibaki — are Kikuyu.

The economically powerful community has always backed its own people — a widespread phenomenon in Kenya, where the tribal vote has played a big role in previous elections.

Politicians have also exploited ethnic divides to deadly effect in 2007-2008, when Kenya witnessed a vicious bout of post-poll violence that pitted mainly Kikuyus against Luos and Kalenjins, leaving more than 1,100 dead.

But this year, Kikuyus — who account for around six million of Kenya’s 22 million voters — will have to choose between Ruto, a Kalenjin and Odinga, a Luo.

The alliance between Kenyatta and Odinga has ruffled feathers in Mount Kenya, where some have turned on their former leader, accusing him of abandoning “kihoto” (the Kikuyu concept of justice) by sidelining his deputy.

“We as the Kikuyus cannot be told who to support, Uhuru is a traitor,” George Mwaura, a 38-year-old motorcycle taxi driver, said at the Kirinyaga rally.

But Odinga’s team insists that the 77-year-old will win a majority in the region, pointing to the selection of Kikuyu lawyer Martha Karua as his running mate.

The choice of Karua, a former justice minister nicknamed the “iron lady”, has “energised and excited the mountain”, said David Murathe, a prominent Kikuyu and vice-chairman of the Jubilee party.

Ruto’s running mate Rigathi Gachagua is also a Kikuyu who once served as Kenyatta’s personal aide, but Murathe said he lacked Karua’s credentials as a key player in Kenya’s pro-democracy movement.

Even accounting for a worst-case scenario, the Odinga-Karua ticket could expect to secure at least 60 percent of Mount Kenya’s votes, Murathe told the media.

“I would not be surprised if Ruto gets the shock of his life” when the results are announced, he said.

Academic Macharia Munene also testified to the presence of the “Martha effect”, telling AFP: “There was a time it appeared to be all Ruto, about six-seven months ago.

“It’s declining, that overwhelming support. It’s been eroded,” he said.

“Whether the erosion is big enough to turn the tables is another matter”.