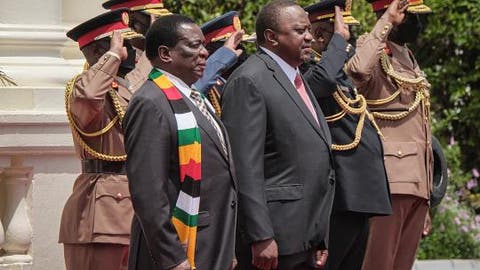 Kenya’s President Uhuru Kenyatta has called on the international community to lift sanctions against Zimbabwe stating the restrictions are hurting the southern African country.

Kenyatta referred to the sanctions as unlawful and promised Zimbabwe of Kenya’s continued advocacy to ensure that the restrictions are lifted.

“This we consider being unfair for these hardships were artificially created and we continue to call on the international community to remove these illegal sanctions,” President Uhuru said.

The Kenyan Leader was speaking at the State House during a joint press briefing with the visiting Zimbabwe President Emmerson Mnangagwa, shortly after the two Heads of State led their respective delegations in bilateral talks.

The two countries signed bilateral agreements, which include Memoranda of Understanding (MoU) on political and diplomatic consultations, tourism and wildlife conservation, and civil aircraft accidents and serious incidents investigations.

Other MoU signed were on women empowerment and community development, youth affairs, cooperatives and sports, and recreation activities.

He pointed out that the signing of the agreement on women empowerment was particular since it was entered into on Monday, a day after the International Women’s Day celebrations during which Kenya re-dedicated herself to the attainment of her ambitions gender goals.

“This MoU will go a long way in realizing this important development agenda. It seeks to promote a closer working relationship between our two countries in achieving the shared vision of women empowerment and community development, and also facilitate the sharing of knowledge, strategies and technology for our women,” Uhuru Kenyatta noted.