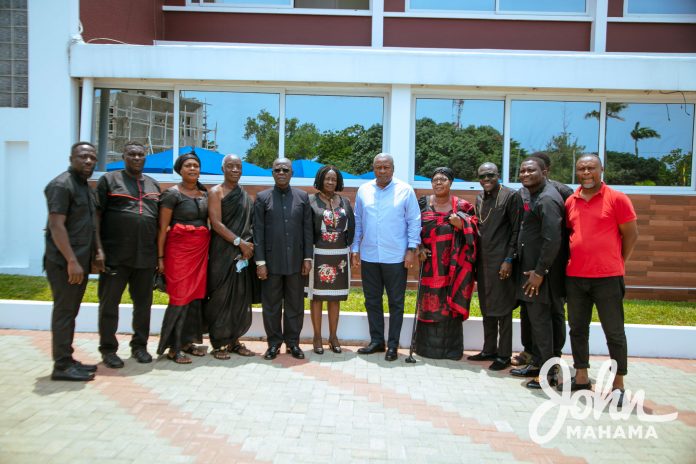 Speaking during the family’s visit to announce the burial and funeral arrangements for the late singer, Mr. Mahama said: “It is God who gives, and it is He who takes”.

The former Ghaianan Leader John Mahama assured the family of his continued support explaining that “he was like my Elder Brother… we all grew up on his music”.

Some of his popular songs include “I go pay you tomorrow”, “Moses”, “Atia” among a host of others.

He was always known as A.B Junior until his father died in 1984 when he assumed the A.B Crentsil name without the junior.

His primary and middle school education was the Takoradi Methodist Primary and Rev Cleveland Middle School respectively. After his middle-school examinations, AB worked as an electrical apprentice under his father, who was Works Superintendent of the technical branch of Ghana Railways at Takoradi.

While in middle school, Crentsil was introduced to the guitar by Mr. Thedoh.

A.B. Crentsil became proficient in playing guitar and started singing along when playing it. He was simultaneously working as an electrician and playing with the Strollers Band owned by one Kwesi Donkor.

Crentsil has played with the El Dorados, the Sweet Talks – which latter group in the 1970s, under the joint leadership of Crentsil and Smart Nkansah, were the resident band at The Talk Of The Town Hotel in Tema, with Crentsil as lead singer — and then finally the Ahenfo Band.