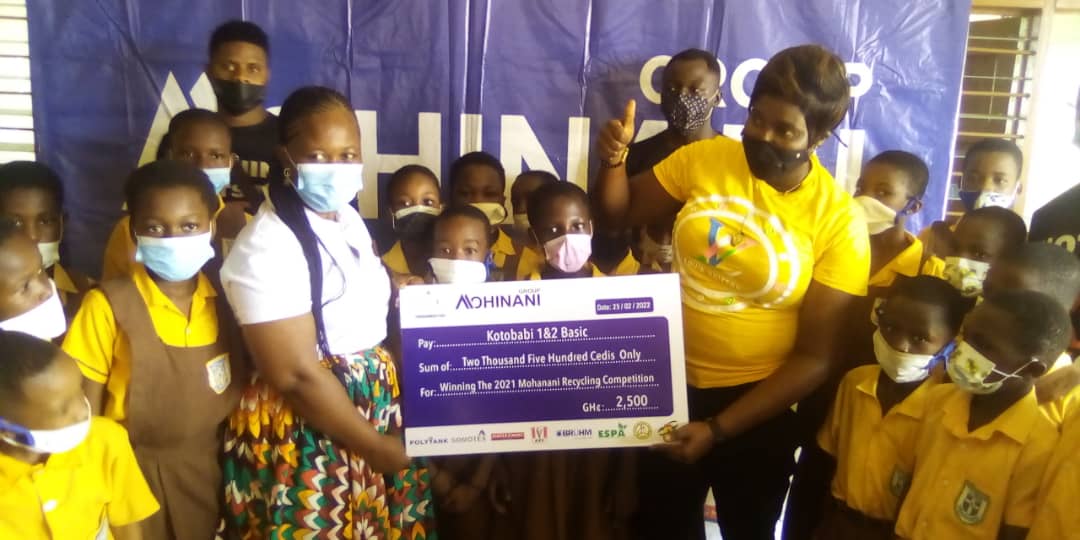 Mohinani Group, a leading business entity in the country has presented a cheque of Two Thousand Five Hundred Cedis (Gh¢2,500.00) to the Kotobabi 1 & 2 Primary School for winning the annual recycling competition in Accra.

The gesture forms part of the Group’s Corporate Social Responsibility (CSR) in rewarding the school for winning the 2021 Mohinani fifth annual recycling competition held among 37 selected schools in the Greater Accra region.

Presenting a dummy cheque, the Group Marketing Manager, Mr. Frank Mickson-Yeboah stated that as part of the enforcement and responsibilities to keep the environment clean, the school have really demonstrated its commitments in waste management and segregation.

According to him, the school have kept a clean environment saying the concept of inculcating waste management at the basic school level helps the pupils to understand the importance of environmental cleanliness at the early stage of their life.

“The move helps them to be environmentally conscious and grow up with the mind-set of keeping their surroundings clean”, he added.

He further explained that the competition has to do more with waste management including the commercial and financial benefits associated with it.

Mr Mickson-Yeboah again said the competition have helped sensitize 18,500 students across the country as 4,694 tons of recyclable materials were collected by participating schools and have drastically reduced the high level of recyclable waste materials bringing to fore good health and personal hygiene in the respective schools, adding that, Ashanti and Greater Accra are the only two regions who have engaged in the competition since the six year of its inception.

He however urged the pupils to inculcate the habit of segregating waste and as well educate their peers to do and apply same in schools and at their various homes.

Also, the Founder and Executive Director of Environment 360, Madam Cordie Aziz-Nash said her outfit in partnership with the Ghana Education Service (GES) have operated the programme for the past 5 years and have impacted positively on waste management in schools through the recycling competition.

“The programme has made giant strides and have consequently transformed the minds of students in waste management and segregation as well as environmental cleanliness”, she said.

According to her, the school has won the competition on three conservative times and are proud to be associated with the Group and appreciated the KFC party organised for the performing class.