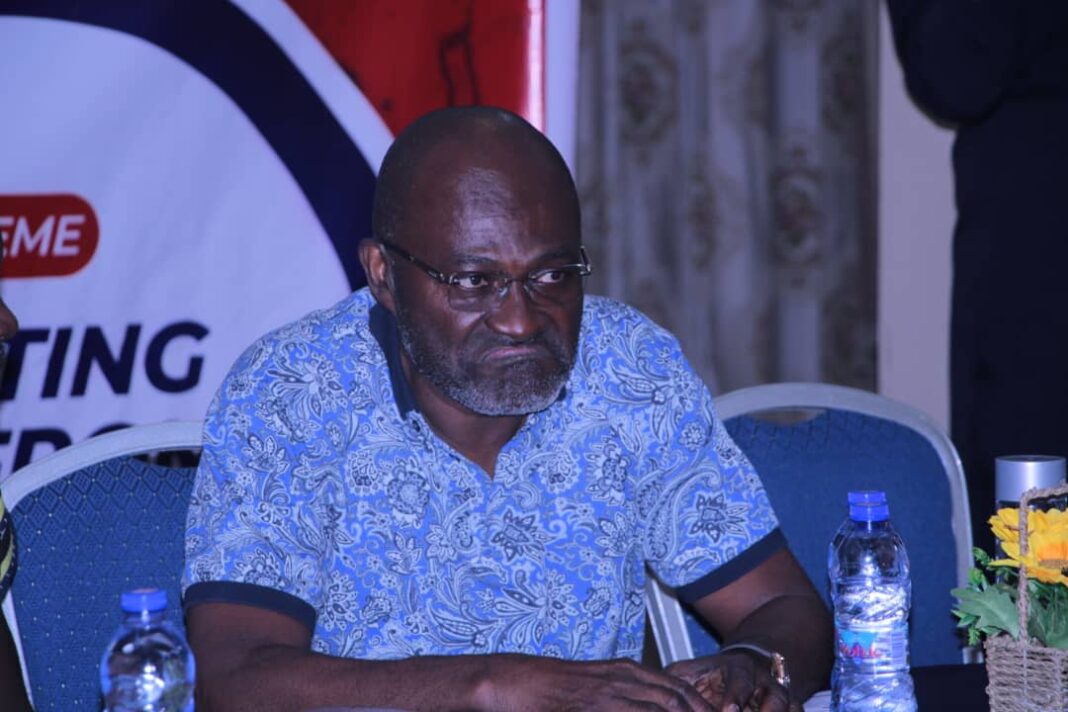 Firebrand Member of Parliament for Assin Central, Kennedy Agyapong has stated that the New Patriotic Party cannot win the 2024 elections with people leading the nation to the International Monetary Fund (IMF) for a financial bailout.

Speaking at an on-going NPP National Constituency Officers Welfare workshop at Koforidua in the Eastern Region Friday, Mr Agyapong expressed disgust about the move by the government to seek a bailout from the IMF.

“Going to the IMF is just like handing over power to the NDC straight away because of the noise we made. Throwing my own words back when I said the NDC went to the IMF because of the mismanagement of the economy or the government. So if NPP is going to IMF what am I going to say.

“So ‘breaking the 8’ is going to be tough. You cannot use the faces of those who took us to the IMF to ‘break the 8’. It will not work. My message to you is simple, you can read my lips and I am not scared of anybody in the party,” Mr. Agyapong disclosed.

He continued: “What I tell you is the gospel truth, those who took you to IMF they cannot, these same faces, they cannot ‘break the 8’. A word to a wise person is enough. I was very sad today when I saw the publication that we are going to the IMF.”

The Assin Central MP is on record to have kicked against the decision by the National Democratic Congress for taking the nation to IMF in 2015.

Ghana on the July 1, 2022 disclosed that it has officially contacted the International Monetary Fund to seek for financial support.

In the statement, President Akufo-Addo, said he had authorized Finance Minister Ken Ofori-Atta to commence formal engagements with the International Monetary Fund (IMF), inviting the Fund to support an economic program put together by the Government of Ghana.

The statement added that this followed a telephone conversation between the President and the IMF Managing Director, Miss Kristalina Georgieva, conveying Ghana’s decision to engage with the Fund.

At a meeting on June 30th, 2022, cabinet indicated its support for the decision.

The engagement with the IMF will seek to provide balance of payment support as part of a broader effort to quicken Ghana’s build back in the face of challenges induced by the Covid-19 pandemic and, recently, the Russia-Ukraine crises, according to the statement from the presidency.

This is the second time Ghana is seeking support from the Bretton Wood institution in seven years after the country engaged them in 2015 under the erstwhile John Dramani Mahama’s government.

In February 2022, the Finance Minister, Ken Ofori Atta, stated that Ghana will not return to the IMF for a bailout despite the mounting economic challenges.

According to him, Ghana is a nation of pride and will seek solutions to the current financial challenges it is facing within.

“I can say we are not going to the IMF. Whatever we do, we are not. Consequences are dire, we are a proud nation, we have the resources, we have the capacity. We are not people of short sight, but we have to move on.

“So let’s think of who we are as a strong proud people, the shining star of Africa, and we have the capacity to do whatever we want to do if we speak one language and ensure that we share the burden in the issues ahead,” Mr. Ofori-Atta told the gathering at the E-Levy town hall meeting in the Northern Regional Capital of Tamale.

In this article:can’t ‘break the 8’,Ken Agyapong,NPP leading Ghana to IMF