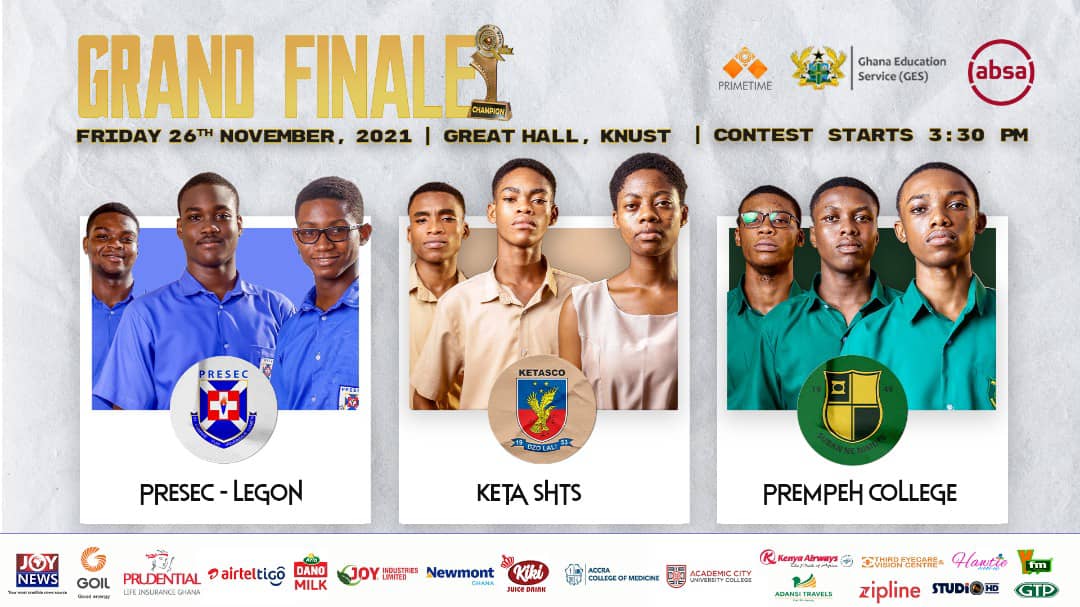 Asantehene Otumfuo Osei Tutu II has pledged to support the book runners of National, Science and Maths Quiz to take the competition to the next level.

Speaking at the grand finale of NSMQ2021 at Kumasi on Friday 26 November 2021 between PRESEC-LEGON, KETASCO and Prempeh College, Otumfuo in a speech read on his behalf promised to “partner managers and sponsors of the competition”.

According to Otumfuo, the transformation of Ghana will depend on science and Maths.

Otumfuo said it is a science and Maths that will lead to the transformation of Ghana.

Otumfuo said this in a speech read on his behalf by Asakyirehene, Nana Prof Mensah Bonsu, at the grand finale of the National Maths and Science Quiz being held at KNUST in Kumasi today 26 November 202.

He urged primetime to collaborate with the Otumfuo Foundation to promote education.

Meanwhile, Director-General of the Ghana Education Service, Prof Opoku Amankwah pledged the GES support for the National Science and Maths Quiz, saying it is a way of nurturing STEM education.

Prof Opoku noted that Science, Technology Engineering, and Mathematics (STEM) education places emphasis on preparing future generations to be successful in their careers.

He noted that preparing today’s learners to become innovators and inventors tomorrow begins with the STEM programme.

Prof Opoku was deputized by the Director of Science Education at the GES, Olivia Osei Opare.

At this stage, finalists are expected to pick up various prizes.

KETASCO has defied all odds to qualify for the grand finale of the National Science and Maths Quiz (NSMQ) after beating competitions from Tamale Senior High School and Wesley Girls’ Senior High School in the semi-finals at the KNUST Campus.

KETASCO started the contest on exciting note, winning the first and second rounds only to score 0 out of 10 in the third round, dubbed ‘Problem of the Day’.

Having put their nose to the grindstone, they quickly put themselves together and won the remaining two rounds to emerge winners of the semi-final with 53points.

KETASCO will battle PRESEC and Prempeh College at the grand finale of the NSMQ slated for Friday November 26, 2021.

KETASCO becomes the first school from the Volta Region to make it to the grand finale of the NSMQ after the school puts up splendid performance.

For sixty-eight (68) years, KETASCO has produced prominent personalities, serving in various fields, capacities, across the nooks and crannies of both Ghana, abroad and among those are former Rector of Ghana Institute of Journalism Dr. Wilberforce Dzisah, Dr. John Kutor, Prof. John Gatsi and others.

In this article:NSMQ2021:,Otumfuo pledges support