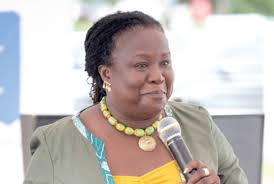 The Former Dean of the School of Information and Communication Studies at the University of Ghana Prof. Audrey Gadzekpo has urged media houses in Ghana to allocate more resources to the training of their employees to enhance their coverage on the marginalized and socially excluded for a more equitable society. She made this call as part of her recommendations to improve the media’s contribution to Ghana’s democratic development during her Inaugural Lecture titled, Taking the Gown to Town: Reflections of a Scholar-Activist on Media in Ghana’s Democratic Journey on April 28, 2022, at the Great Hall of the University of Ghana.

The lecture was premised on her close to 30 years work as a media and communication scholar and practitioner in Ghana and abroad.
According to Prof. Gadzekpo, the perpetuation of gender stereotypes and sexist attitudes that pop up patriarchal norms in society as well as inattention to issues of concern to women affirm criticisms that the media does not demonstrate gender equality.
Explaining the gendered nature of the media, the Communications Professor added that media ownership is male dominated, few women are represented on boards of media companies or in top management positions, most newsrooms are inhospitable for women to work due to failure to enact policies to sanction and deter sexual harassment.

Also, some newsrooms are inaccessible to physically challenged workers because no lifts have been provided for ease of mobility, as well as no arrangement in place to enable the visually and hearing-impaired persons to participate in programs. Citing a more recent instance where the media’s action has sought to diminish efforts at enhancing gender parity, Prof. Gadzekpo mentioned that journalists have betrayed their own biases against sexual minorities by stereotyping and denigrating members of the LGBTQ+ community in their coverage and failing to give them equal opportunity to defend their rights and generally failing to challenge those who seek to trample on their human rights. “It has been disappointing to see how reluctant the media have been to call out traditional leaders who threaten to ban citizens perceived to be LGBTQ+ from their towns and villages,” she lamented.

As a member of a group of 18 persons who petitioned parliament against the proposed anti-homosexuality bill, Prof. Audrey Gadzekpo said she has had her fair share of the injustice mitted out to her through verbal lynching on social media and at times carefully orchestrated by legacy media practitioners.

The lecture also highlighted how most Christian newsrooms especially those located in southern Ghana perpetuate inequality against other religions particularly our own traditional religions by either neglecting to cover them or adopting a negative tone towards them in their reports, cautioning, that part of living in a democracy is to tolerate views and values that may go against ours. “No matter a journalist’s religious convictions, ethnic loyalties, or political views, they have an obligation to educate the public,” she noted.
The gendered nature of the media and lack of diversified voices, Prof. Gadzekpo believes has resulted in the lack of women as expert sources and the tendency towards manels that is, media panels mostly composed of men. This assertion is affirmed by the findings from a recent Media Foundation monitoring report on the Level of Involvement and Participation of Women in Public Discourse on Radio in Ghana which indicates that 83% of the time, it is male voices that are heard on discussion programs, whilst only 11% of expect sources interviewed in Ghana are women and even on mixed panels, male panels were given more time to speak and are given more respect than women.

Even more worrying, is the finding that men’s knowledge was not questioned as much as women when they appeared in the media coupled with the hostile societal attitudes towards outspoken women which discourage women from participating in talk shows, particularly shows that are needlessly confrontational.
As if this is enough, the Media Scholar added that newsroom practices continue to ignore women’s societal constraints in the design of news programs by being oblivious of the fact that in Ghana’s conservative society, women sometimes face difficulties accommodating professional and household roles without advance notice. This is seen in how the media invite women to appear on shows at short notice or come on late night shows.

Admitting that whereas the media have been very influential in playing their Monitorial, Radical, Facilitative, Collaborative, and Cultural Glued roles by among other things surveilling the environment to report irregularities and providing information to inform citizens’ decision making, promoting the rule of law, creating platforms for sharing of different opinions, collaborating with government for developmental purposes such as during the fight against COVID-19, and upholding our cultural heritage respectively, Prof. Audrey Gadzekpo believes there still remains a lot for the media to do if it is to operate freely and firmly to accelerate Ghana’s democratic journey and one of these is the urgent need for the media in Ghana to be more gender-responsive by addressing the pertinent issues this article encapsulates.