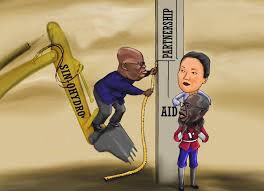 Obviously, NPP advocates here, have in a careless manner, run revolt with deluding cases and falsehoods gave to them under an apparent pre-emptive work to repel supported analysis of the Sinohydro deal driven by Vice President Bawumia.

The accompanying realities would anyway do the trick:

1. In 2017, we were told there was a $2 billion bonanza by Dr Bawumia under which the Chinese firm, Sinohydro, will attempt foundation projects worth $ 2 billion to be paid for with deals produced using refining Ghanaian bauxite.

2. Then, at that point, in 2018, we were told there was $500 million AVAILABLE IMMEDIATELY to develop Roads and Bridges. This sum become $640m in an EPC contract arrangement brought to parliament that very year.

3. The ventures under this stage were time bound and shouldn’t run ceaselessly. Every one of the 10 parts (stage 1) projects were booked to be finished before the finish of 2020. Right now, three clear a very long time after the understanding was taken to Parliament, NOT A SINGLE one of these parcels has been finished. A large portion of them have not begun.

4. As toward the finish of 2020, official figures contained in briefings shipped off Parliament by government showed that under $40m had been drawndown out of the $640m. How could this administration be approached in a serious way with a particularly shocking drawdown rate?

5. The response to inquiries regarding Sinohydro isn’t a rundown of unconstructed of streets. The appropriate response should show that $640 million has been spent to construct streets as of the finish of 2020 as indicated by explicit guarantees settled on in the EPC arrangement shipped off Parliament.

This is really a party that once gotten a credit from a beauty parlor and made such an uproar like the $1 billion guaranteed then was coming the next day. It NEVER came!

Generously excuse and treat with absolute hatred those misleading flyers getting out and about via web-based media purportedly portraying me as approaching Minority Leader.

I have no such interest. Unnecessary to add that I am unquestionably not in thought or accessible for thought as cutting edge head of the NDC council in Parliament.

The people who look to plant seeds of question, disunity and conflict inside our positions with such pitifully childish plans have as of now fizzled and will consistently come up short.

The walker endeavor to crash our concentration in seeking after the assault of the public tote and the gross botch of the nation won’t win.

Fearless, impressive, joined together, solid and energetic will we remain.