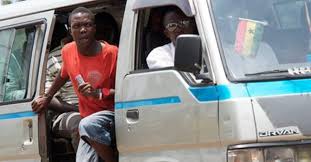 Management of the commercial transport unions across the country has asked its members to place red bands on their vehicles as a sign of warning based on government’s failure to engage them on the issue of scrapping some taxes on petroleum products to reduce the fuel prices.

The angry transport unions said they would fully halt their services and embark on nation-wide strike action coming Monday 22nd November if the government failed to listen and engage them on their grievances.

The unions last week threatened to embark on a nation-wide strike action because of the continuous hike in fuel prices and failure on the side of government to heed to their grievances by scrapping some taxes they termed “nuisance” on the petroleum products in order to reduce the fuel at the pump.

Speaking to the National Communication Director of GPRTU, Alhaji Imoro Abass, said since the transport unions threatened the strake action, government has refused to engage the union and resolve the issue, adding that, this shows a sign of disrespect to the entire union and therefore we must also take action to show our importance in governance.

According to Alhaji Abass, government failure to intervene and engage the entire transport unions would cause an uncomfortable situation to commuters and passengers on monday during the strike action cross the country.

He charged all the transport operators and drivers to take this exercise serious in order not to undermine the integrity of the upcoming strike action.

Alhaji Abass also urged the public, commuters and passengers to be patient and understand their plight during the nation-wide strike action across the country.

“ Since that is the only way to let government listen to us or else or businesses in the transport industry would collapse”, he added.