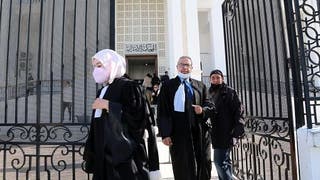 Tunisian magistrates and lawyers staged a demonstration outside Tunis’ Palace of Justice on Thursday, protesting the recent announcement by the nation’s president that he intends to dissolve the national judiciary body.

In a televised speech over the weekend, President Kais Saied said he planned to disband the Superior Council of the Judiciary, claiming suspicions of corruption and possible mishandling of politically charged cases.

Opposition members have said the move was just the latest example of the president’s power grab.

“The Superior Council of the Judiciary can from now on consider itself a thing of the past,” the president said, adding that a decree to set up a provisional council will be issued soon.

Following a public outcry, both at home and abroad, on Wednesday Justice Minister Leila Jaffel said Saied would maintain the council as a constitutional institution but would change the law regulating it and set up a temporary judicial authority in the meantime.

One lawyer present at Thursday’s protest said the latest announcement changed little and that the independence of the judiciary was under threat.

“This is a communications tactic, a media tactic” said Latifa Habachi.

“We do not trust the justice minister or the President of the Republic. Today damage is being done to the independence of the judiciary by the dissolution of the Superior Council of the Judiciary.”

The crowd of hundreds of lawyers, magistrates and citizens gathered on the steps of the palace, chanted slogans and held placards calling for reversal of the decision and restoration of constitutional norms.

He’s been governing by decree since then, cracking down on corruption and throwing several lawmakers and business people in jail on corruption charges.

While constitutional lawyers and political opponents, including the influential Islamist party, say the president’s actions are unlawful, the decision has proven widely popular with Tunisian public.