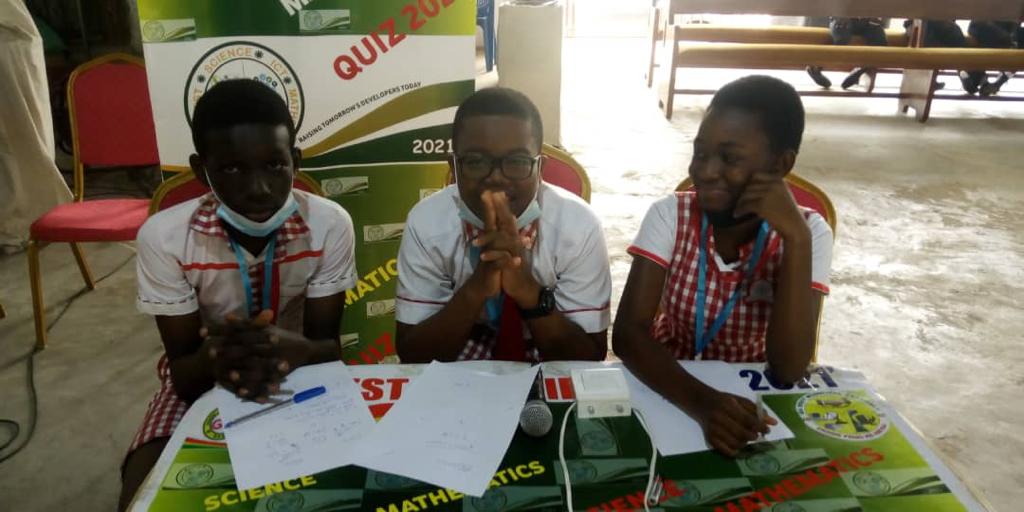 It has emerged that Cherryfield Montessori School at Pokuase ACP Junction has pulled the magic over Shalom International School to win the preliminary stage of 2021 GA West BSTEM Quiz Competition after it hammered the latter 106 : 42.

Speaking to the media after the preliminary stage of 2021 GA West BSTEM Quiz Competition held at Presbyterian Church of Ghana behind AMASAMAN Market on Wednesday 21 July 2021, Chief Executive Officer of Cherryfield Montessori School Madam Magdalene Dzifa Adzanu said “We are well- prepared for this competition and we hope to bring the cup home. We are targeting the topmost prize”

At the first round of the competition both schools scored 20 : 20, 6 : 6 on the ‘Problem of the Day’ but the tie at the top was broken when Cherryfield Montessori School began to widen the gap at round 5, during the interpretation of riddles, exhibiting intellectual acumen against its competitor Shalom International School after it recorded most of the bonus marks, a splendid performance that puts it on the path to landslide victory.

In the final round of the preliminary stage of the competition that involved interpretation of riddles, Cherryfield Montessori School polled higher marks rising to 106 as against its closest contender Shalom which managed to garner 42 marks.

According to the Cherryfied Montessori School’s CEO Madam Magdalene Dzifa Adzanu, the contestants were on point, the “contestants were adequately prepared ahead of the competition to excel and bring the trophy home in a grand style”.

Madam Magdalene Dzifa Adzanu noted that “With this latest impressive performance, the school is living no stone unturned to capture the cup at the final stages of the BSTEM Quiz Competition. That’s our main target and we’ll hit the target to bring the cup home”.

Present at the 2021 BSTEM Quiz Competition were the GA West Municipal Director of Education, Rev. Peter Atta Bilson, Coordinator of the competition Justice Amewugah and representatives of both schools.