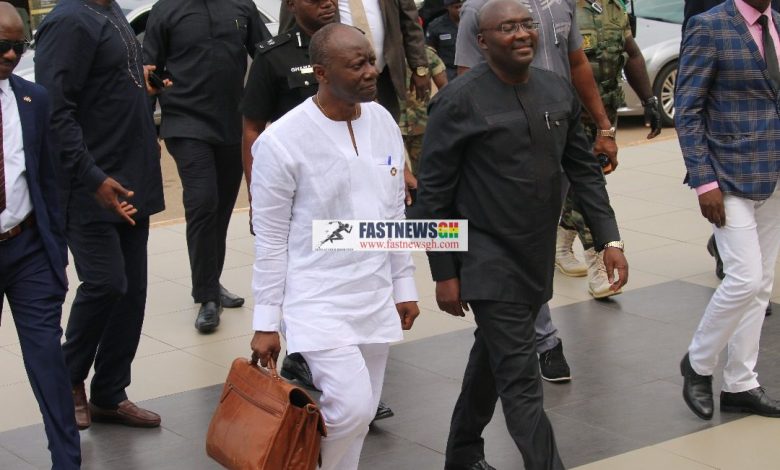 At a press briefing on Monday, 6 December 2021, Mr Ofori-Atta said he has officially written to the Speaker of parliament concerning the modifications.

“On behalf of the President, I have written to the Right Honorable Speaker of Parliament with details of amendments in response to emerging concerns by all stakeholders including the Minority Caucus”, he said.

Agyapa Royalties deal: We shall amend paragraphs 442 and 443 to take out references to mineral royalties collateralisation. It is important to note that any reference to Agyapa was for informational purposes and, as such, was not reflected in the fiscal framework

Tidal Waves disaster: In respect of the unfortunate tidal waves which rendered about 3,000 people homeless in Keta, we shall make the necessary budgetary allocations of at least GHS10 million to complete the Feasibility and Engineering studies for the coastal communities adversely affected. We will broaden the scope of the study to consider a more comprehensive solution to protect Ghana’s 540 Km of coastline, including the 149 Km between Aflao and Prampram. Meanwhile, NADMO has responded to the humanitarian crisis created by the tidal waves on the Keta coastline.

Aker Energy transaction: We shall amend paragraph 829 of the 2022 Budget on the acquisition of a stake from Aker Energy and AGM Petroleum by GNPC, to reflect the resolution of Parliament dated 6th July 2021 that “the terms and conditions of the loan for the acquisition of the shares shall be brought to Parliament for consideration pursuant to article 181 of the Constitution; and

Benchmark values: We shall avert any hardships to importers and consumers while safeguarding the interest of local manufacturing industries to secure and expand jobs for our people. This administrative exercise, which reviewed 43 out of 81-line items, has the objective to promote local manufacturing and the 1D1F policy, including the assembling of vehicles. It is important to note that this adjustment affects only 11.4% of the total CIF value, of which 50% is for vehicles. From our analysis, the potential increase in retail prices should be relatively insignificant and therefore inflation should be muted. The YouStart policy will also support our accomplished Traders with appropriate training and access to capital to become Manufacturers in order to expand the industrial base of our society and our import substitution strategy, in line with our Ghana Beyond Aid agenda.

E-Levy: On the matter of the E-levy, having regard to its serious fiscal implications, we will continue our consultations with the Minority Caucus in Parliament and other relevant stakeholders, with a view to achieving consensus and reverting to the House in the shortest possible time.

Mr Ofori-Atta noted: “We will work with the relevant Committees of Parliament to reflect these modifications in the 2022 Budget, as is the usual practice before the Appropriation Bill is passed. Any other concerns which may emerge shall be addressed during the discussions of the estimates by the Committees, as has been the tradition”.

Following the stalemate over the budget, theMinority made five demands, which it said needed to be met before it could support the passage of the budget.

They include the following:

1.Suspend the Electronic Transaction Levy (E-Levy):The Government should suspend the E-Levy and properly engage stakeholders to agree on a reasonable policy. How can mobile money payments, bank transfers, merchant payments, and inward remittances be charged 1.75 per cent? The policy is not retrogressive, not pro-poor, and does not support the much-touted digitalisation agenda and cash-lite economy that we all yearn for.

2.Withdrawal of Agyapa:The NDC Minority will not support any collateralisation of our revenues, particularly mineral resources. The future of our country will be bleak if we continue in that regard. We cannot jeopardise the future generations of our country just for our present desires.

3.Provide for Tidal Waves Disaster:The Government should incorporate in its revised Budget adequate measures to address the issue relating to the Tidal Waves Disaster in Keta and other communities. The victims should be supported. And the Phase II of the Blekusu Coastal Protection Project must find space in the Budget.

4.Properly re-construct the wording relating to the Aker Energy:Relating to GNPC acquisition of stake from Aker Energy and AGM Petroleum, the revised Budget should reconstruct paragraph 829 of the rejected Budget to reflect the decision of the House as captured on 6th August 2021 Votes and Proceedings of Parliament.

Chaotic scenes broke out in parliament between Minority and majority over the approval and rejection of the Budget.