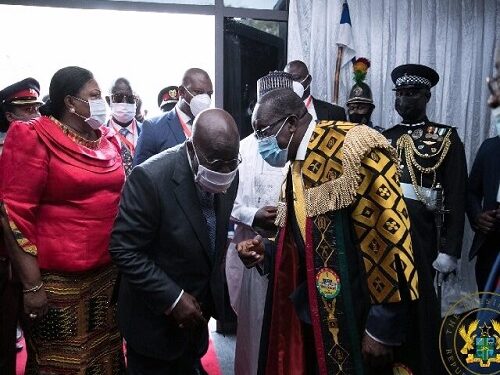 Ghana’s Speaker of Parliament Rt. Hon. Alban Kingsford Sumana Bagbin has left the blame squarely at the doorstep of the presidency for delays in the run-up to the presentation of the 2022 Budget and Economic Policy Statement on Wednesday November 17, 2021.

The presentation of the 2022 budget was scheduled to be delivered at 10am but the Finance Minister Ken Ofori-Atta failed to show up on time until 1pm, leaving many grumbling, and speculating that it was attempt to balance the economic figures before delivery.

The failure to show up on time, a deviation from the norm, which compelled Ghanaians to wait several hours contrary to the 10am schedule on Wednesday, November 15, 2021, left questions begging for answers for the three-hour gap in a rather national exercise.

Other reports purportedly suggested that the Speaker Bagbin was demanding scale up in budgetary allocation from the executive for Parliament.

But at a 2-day post budget workshop for MPs over the weekend, head of debates, Alban Bagbin who did not take the issue lightly, revealed that the presidency has failed to collaborate with the legislature on the day.

According to him, after his previous demand for a 2% budgetary allocation from the executive, the President failed to respond to a letter which was sent to his office. He demanded answers from the Minister of Finance which answers he said were unsatisfactory to him.

Clearing the air on delay in presentation of the 2022 fiscal policy, Bagbin faulted the Presidency for failing to collaborate with the Legislature ahead of the national assignment.

Bagbin however, urged MPs to take advantage of his Speakership to redeem and restore public confidence in the legislative arm of government.