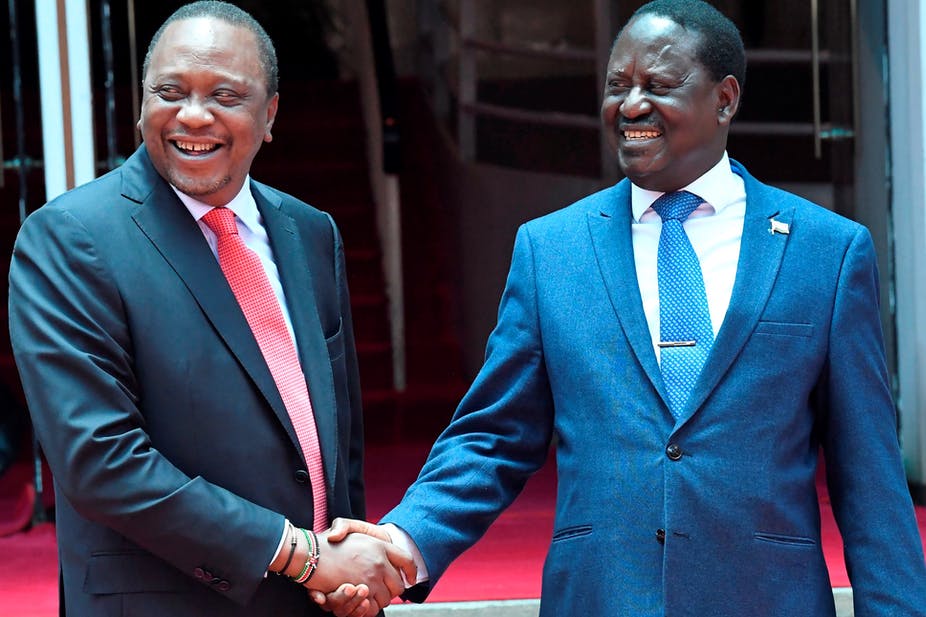 In what appears to be the most shocking ‘turn-of-event’ in Kenya’s political history, incumbent President Uhuru Kenyatta and his governing Jubilee Party on Saturday joined a coalition with veteran Opposition Leader Raila Odinga, inching closer to formidable and potent force of unity ahead of crucial August elections. Kenya’s President Uhuru Kenyatta is backing his long-time political rival Raila Odinga ahead of crucial August elections after he endorsed a man he faced in several political and legal battles.

Kenya’s President Uhuru Kenyatta on Saturday said his party had joined an opposition coalition ahead of presidential and parliamentary elections in August in a bid to clean up politics of “crooks“.

The revelation came after Kenyatta’s anointed successor William Ruto, who wants to contest the presidential election, was sacked from the ruling Jubilee Party.

“I heard one person saying that there is nowhere in the world where a government unites with and supports the opposition,” Kenyatta said, announcing that Jubilee was joining the Azimio la Umoja (Quest for Unity) coalition headed by veteran opposition leader Raila Odinga.

“Kenya will be the example. We are mature enough to distinguish between politics and the needs of the people.”

The East African powerhouse has traditionally been ruled by presidents from the dominant Kikuyu tribe like Kenyatta or the Kalenjin tribe like Ruto.

This year’s contest is shaping up to be a two-horse race between Ruto and Raila, a mainstay of Kenyan politics from the Luo community.

Ruto was initially anointed by Kenyatta as his successor but found himself marginalised after arch-foes Kenyatta and Odinga announced a truce in 2018.

“We are looking to create a movement that will deliver the country,” Kenyatta said.

The Azimio la Umoja coalition is expected to pick its prefered presidential candidate in two weeks.

But many observers say Odinga’s nomination is a foregone conclusion.

“We are in this to restore the soul and secure the future of our people,” Odinga said on Saturday.

“If we stand together, I am sure nothing will defeat us.”

The 77-year-old — a former political prisoner and Prime Minister — will then likely head into the polls without his usual fiery anti-establishment image.

– ‘One strong man’ –
Kenyatta for his part said the coalition “will discuss and pick one strong man to face the crooks on the other side”.

With its diverse population and ethnic voting blocs, elections in Kenya have often been marred by violence.

More than 1,100 Kenyans lost their lives in 2007 when a disputed election result sparked tribal violence.

The rapprochement between Odinga and Kenyatta came about after post-election fighting in 2017 left dozens of people dead.

The pair unsuccessfully tried to introduce sweeping constitutional changes as a way to end repeated cycles of election violence.

The reforms — popularly known as the Building Bridges Initiative (BBI)– proposed expanding the executive and parliament to more evenly divide the spoils of victory.

But it was seen by critics as a way to enable Kenyatta — a two-term president who cannot run for a third — to remain in power by establishing the post of prime minister.

The government has appealed a court ruling that rejected the proposals and said Kenyatta could even be sued in a civil court for launching the process.

In this article:2022 Polls:,joins opposition for presidential bid,Kenya's ruling party