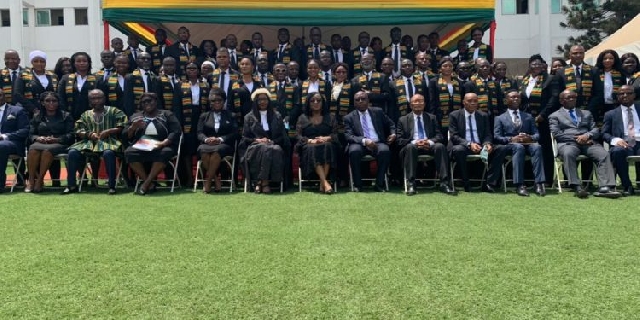 Ghana School of Law (GSL) has inducted the 499 students who were earlier denied admission for allegedly not meeting the cut-off point for entry.

The students were inducted on Friday, 4 March 2022.

The 499 students were refused admission despite scoring 50 percent which is the required pass mark.

On Friday, 29 October 2021, Parliament resoundingly voted in support of a motion filed by Majority Chief Whip Alexander Afenyo-Markin to compel the GLC to admit all students who had passed the entrance exams per the advertised rules of the examination.

Following the resounding vote in support of the motion, the First Deputy Speaker of Parliament, Joe Osei-Owusu, directed the GLC to “proceed and admit all the students who passed in accordance with the advertised rules of the examination.”

But responding to Parliament’s directive, the Attorney General and Minister of Justice Godfred Yeboah Dame in a response to the directive said “Whilst recognising the general legislative powers of parliament in Ghana, except as have been circumscribed by the constitution, I am constrained to advise that parliament is devoid of a power through the use of Parliamentary resolution, to control the process of admission into the Ghana School of Law. The mode of exercising legislative power enshrined in article 106 of the constitution does not admit of resolutions.”

The Attorney General however directed the General Legal Council (GLC) to admit the 499 students who were denied entry into the Ghana School of Law.

According to the AG, the students are either to be admitted to the GSL this November or in May 2022.

But, the AG recommended that the GLC ensure that both sets of students are called to the bar in the next two years.

In view of that, Ghana School of Law has inducted the 499 students who were earlier denied admission for not meeting the new cut-off point for entry.