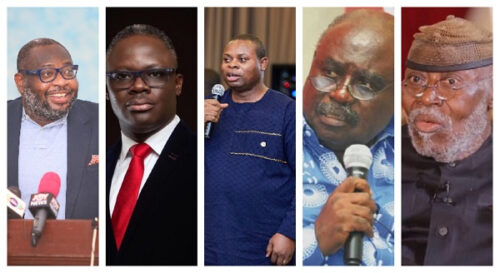 The planned Arise Ghana demo will be the subject of a court hearing later today, June 27, 2022, as the Police move a motion seeking to force organizers to amend the time and mode of their protest.

The pressure group, Arise Ghana, is set to undertake the June 28 – 29, 2022 demonstration in Accra in a bid to highlight economic and governance challenges bedevilling the country.

Even before that, several public figures have since thrown their weight behind the organizers. Among them were two prominent members of governing New Patriotic Party, NPP, two top journalists and a top civil society actor.

African Editors looks at these personalities and what some of them have said publicly about the protest.

Host of the Good Morning Ghana programme on Metro TV, on Thursday, June 23, declared his support for the Arise Ghana demo stating that the issues being raised sat well with him.

Randy Abbey’s endorsement was made on Metro TV during his show, he said: “Next Tuesday, next Wednesday is the (Arise Ghana) demo, you know I have never participated in a demonstration but I endorse your demonstration. I endorse it,” he said.

Recalling his days as part of the Occupy Ghana group, he said: “I am going to look for my red outfit which I used to wear for the Red Fridays and to observe the Occupy Flagstaff House demonstration a few years back.

“Looks like there is going to be a lot of civic action for democratic accountability within the weeks and months ahead, starting with the 48-hour Arise Ghana demonstration scheduled for this Tuesday and Wednesday, 28th and 29th June, against the frightening economic hardships, the intransigence in seeking to pursue the dubious Agyapa deal insane Forest reserve land grabbing and high-level daylight robbery, corruption.

“Things were not this bad when I did and joined the Occupy Ghana Friday protest,” he concluded.

The two founding members of the NPP declared support for the demonstration at separate meetings with leaders of the Arise Ghana demonstration when they paid courtesy calls to them.

Both men, who are part of the now famed ‘kume preko’ demonstration, stressed that their support stemmed from the fact that conditions in the country were ripe for such a protest.

The IMANI Africa CEO has been vocal on topics of national interest from the economic downturn to issues of corruption and lack of accountability by the government.

He expressed his support for the protest via a social media post last week. He tweeted: “ARISE GHANA DEMO! NEXT TUESDAY AND WEDNESDAY!
ARISE, FOR THE ECONOMY IS GONE MAD. ARISE TO PREVENT US BECOMING SRI LANKA! ARISE AND GO TO THE IMF NOW! ARISE RESPONSIBLY NEXT WEEK.”

Arise Ghana describes itself as a group comprising political party leaders, media practitioners, civil society players, creative arts, trades union among others determined to relentlessly champion the common cause of the Ghanaian people.

The group states that they also want to provide a voice for the voiceless and seek reforms that would bring about the needed change in the socio-economic, politico-social, and general wellbeing of the Ghanaian citizenry.

According to a recent statement, the historic two-day demonstration is primarily to protest persistent and astronomical hikes in fuel prices by the Akufo-Addo/Bawumia government that has imposed excruciating economic hardships on Ghanaians.

It said it was also to protest the imposition of the obnoxious E-Levy on the already-burdened Ghanaian people by the insensitive Akufo-Addo/Bawumia Government and demand a full scale and bi-partisan parliamentary probe into COVID-19 expenditures.

Others are to protest the grabbing of State lands by officials of the Akufo-Addo/Bawumia government, particularly the de-classification of huge portions of the Achimota Forest reserve.

The rest are to protest the increased rate of police brutalities and state-sponsored killing of innocent Ghanaians, as well as the growing culture of human rights abuses under the watch of President Akufo-Addo and Vice President Dr Mahamudu Bawumia and demand the total cancelation of the fraudulent “Agyapa” deal.

In this article:5 top personalities,Arise Ghana protest,lacing boots to join