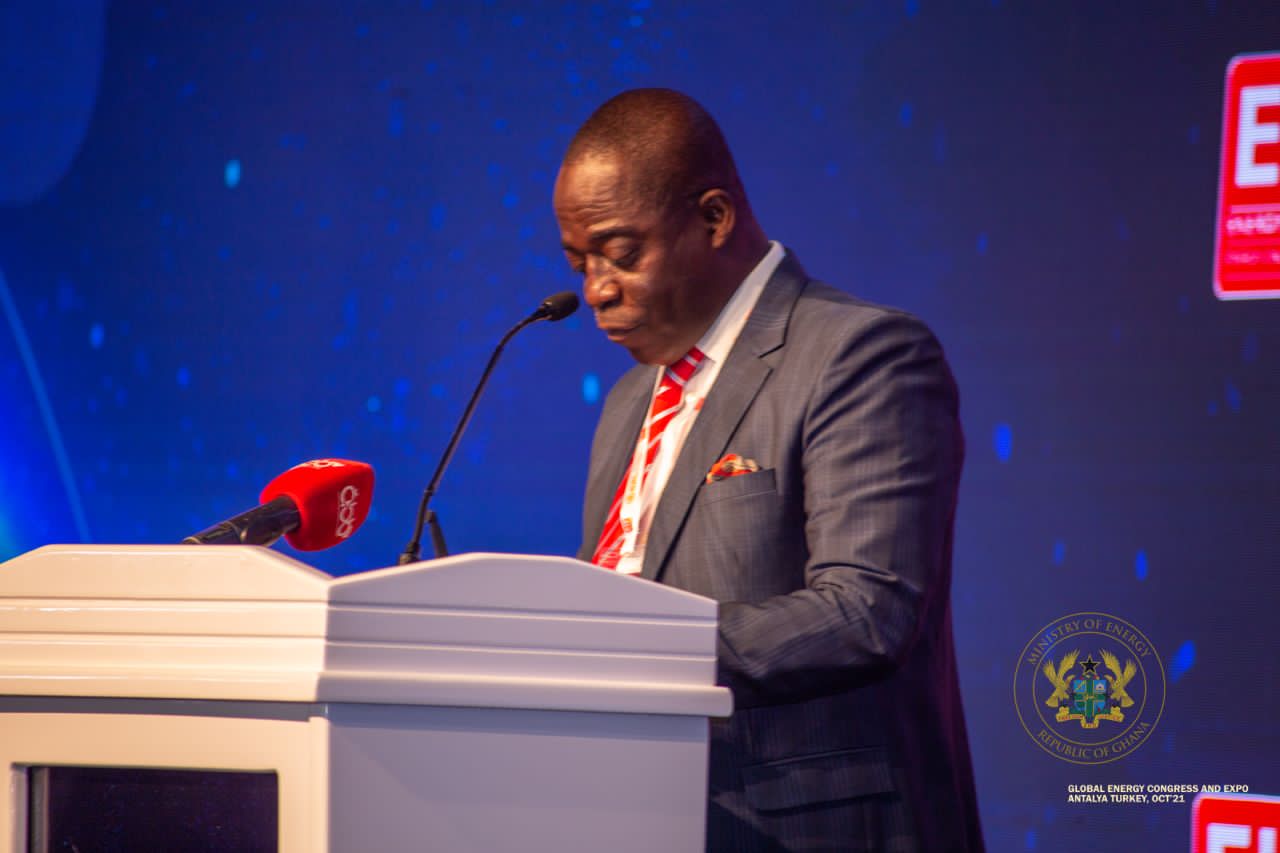 Deputy Minister of Energy, Hon. William Owireku Aidoo, has urged investors to consider Ghana as a favourable destination for investments due to good policies in the  energy sector among others, which he stated ranks among the most attractive on the continent.

Hon. Aidoo, who is also the MP for Afigya Sekyere South in the Ashanti Region, made this statement on behalf of the sector Minister, Dr. Matthew Opoku Prempeh, on Wednesday when he addressed the 14th EIF World Energy Congress and Exhibition currently taking place in Antalya, Turkey under the theme under the theme “Energy Conversion and Renewable Energy”.
Addressing the 14th congress on the topic ‘Ghana’s Energy Situation – Our Policies, Opportunities and Challenges’, Hon. Aidoo stated that the Ghanaian energy sector is in a period of transition with the aim to creating a balance between the ecosystem and economic development, and that the country’s medium to long term goal is to increase the contribution of renewable energy from the 120MWe installed capacity representing 2.4% to more than 1000MW in the national generation mix and thus reach 10% renewable energy in the generation mix by 2030.

He further stated that Ghana intends to accelerate the construction of the first utility-scale nuclear power plant within the same period to generate at least 1000MW of power. Coupled with other green energy technologies such as hydropower and large energy battery storage systems, mass electric-mobility for the transportation of goods and services, he declared, “I am confident to announce that Ghana is on the path to becoming the first country in the West African subregion to reach the UN net-zero emission target. Thus, significantly large opportunities and markets are being created in the low-carbon sectors and we welcome multinational corporations here present to consider Ghana and the ECOWAS subregion as preferred investment destination.”

The Deputy Minister also referred to other initiatives such as the creation of the necessary legal and fiscal environments to attract private sector participation in the sector with Independent Power Producers (IPPs) such as KarPowership Holding and AKSA Ghana who currently generate approximately 460MW and 350MW respectively of clean thermal electricity using local natural gas supply in Ghana. “ I can say without equivocation that the energy sector policies of Ghana are among the most attractive in Africa”, the Deputy Minister stated unequivocally.

Under the SREP, Government targets the deployment of 35,000 units of solar home systems for off-grid communities, 55 units of mini-grids and 15000 units of net-metered solar PV installation. We are rolling out the full implementation of this program in the first quarter of 2022 with initial financing contributions from the Government of Ghana, African Development Bank, Swiss Government and the Climate Investment Fund.”

Hon. Aidoo stated that in response to these enabling environments, the Ghana renewable energy market has begun to attract major bilateral and multilateral investments from countries such Germany, Japan, Turkey, China, the United States of America, the Middle East, United Kingdom and bolster confidence for continuous growth.

In respect of various challenges in the sector, he revealed that government is committing resources to critical areas of the energy sectors and reducing the wastage through the implementation of policies such as the Cash Waterfall Mechanism (CWM), the Energy Sector Recovery Program (ESRP) as a major intervention for rebuilding the foundation for a financially sustainable and efficient energy market.

Ghana’s delegation to the event includes senior officials from the Ministry of Energy as well as other key figures in the renewable energy sector.