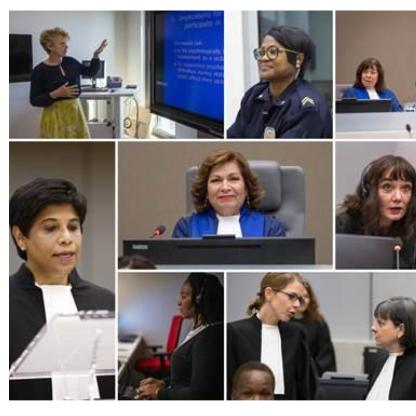 “I reaffirm my view that achieving gender equality represents an urgent operational priority for my Office”, ICC Prosecutor Karim A. A. Khan QC said as the
International Criminal Court marks International Women’s Day.

The International Criminal Court (“ICC” or the “Court”) marks International Women’s Day in support of global action to advance gender equality and the empowerment of all women and girls.

The ICC promotes women’s rights and considers gender perspectives through its work, including in the ICC Courtroom itself, in communities affected by atrocity crimes, and in its global work cooperating with over 120 States Parties. Gender perspectives are important considerations in ICC proceedings, including when Judges order reparations to victims.

The Court’s Principals take part in the International Gender Champions leadership network in their capacity as heads of the three organs of the Court, and there is a 50/50 gender balance among the Court’s current 18 Judges. Internally, the Court is taking concrete steps to further strengthen and promote gender equality among its staff of over 900 members from nearly 100 countries, appointing a Focal Point for Gender Equality, and holding consultations on the ICC’s draft Strategy on Gender Equality and Workplace Culture, which conclude this week.

The President of the Court, Judge Piotr Hofmański stated: “On International Women’s Day, the International Criminal Court reaffirms its strong commitment to gender equality and to women’s rights. To ensure a safe and inclusive workplace for all, as well as to benefit fully from the extensive contributions of women, it is essential that we integrate women’s perspectives in all spheres of the Court’s work. In the last year, the Court has significantly enhanced its attention on these issues with a full-time Focal Point for Gender Equality appointed in March 2021 and active work on many key policies. Specifically in the ICC’s Judiciary, I have requested an independent evaluation of staff working conditions to find out where improvements are needed. Women’s rights are human rights, they are critical to the wellbeing of society as well as for all institutions, and it is for all of us – men and women alike – to strengthen and promote them.”

ICC Registrar Peter Lewis stated: “As Gender Champion, and as a Principal of the Court, I am fully committed to taking on the comments and concerns raised by staff and the Independent Experts Review regarding gender equality and work culture; as one Court, we are taking concrete and strategic steps to shape and enable a work environment that reflects high standards of respect for gender equality, diversity and inclusion, ensuring the dignity, wellbeing, safety, and inclusion of all individuals affiliated with the Court.”

Looking to the people it represents in Court and seeks to protect from crimes, the ICC bolsters women’s rights on many levels. One priority area is specifically to investigate and prosecute, and therefore deter, violence perpetrated against women and children in times of conflict in accordance with the Rome Statute.

ICC Prosecutor Karim A. A. Khan QC stated: “On this International Women’s Day, I reaffirm my view that achieving gender equality represents an urgent operational priority for my Office. The empowerment of women is not something we should regard as simply a question of equity, it is essential in ensuring that our work is conducted in line with the highest possible standards. Gender equality is a prerequisite for high performance. As I have stated in the context of our broader work at the International Criminal Court, the goal of gender equality requires that none of us are bystanders. I am committed to ensuring all members of our Office, men and women, are empowered to drive change that will ensure our working environment is one in which everyone can feel safe, welcome, and can thrive professionally. In doing so, we will ensure we can meet the hopes and expectations of those that look to us for support.” He added that he wanted “this year to be a turning point for our approach to gender equality and empowerment. I look forward to working with all colleagues and partners in this effort.”