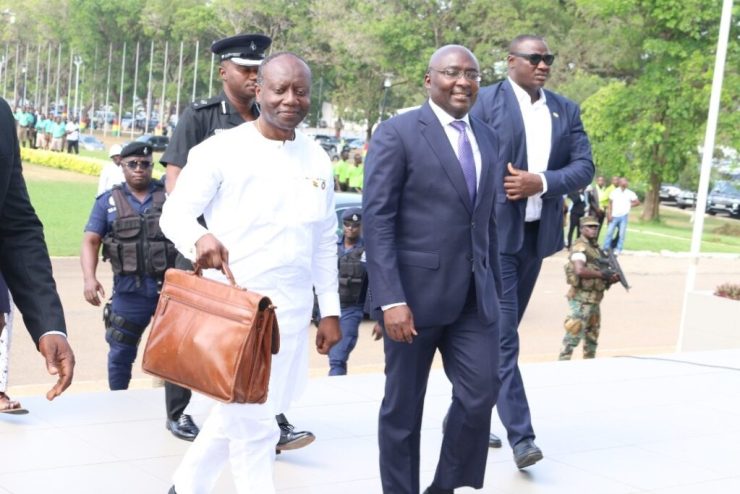 Honourary Vice President of Imani Africa, Bright Simons is insisting the Finance Minister Ken Ofori-Atta must be candid in his mid year budget review to be presented in Parliament on Monday and admit that domestic revenue handles such as the Value Added Tax (VAT), the e-levy and Corporate Tax, are not working as expected. He said the Finance Minister should admit that these revenue handles are underperforming.

Speaking in an interview ahead of the budget review, on Thursday July 21, monitored by African Editors, Bright Simons said investors will be looking at whether government makes these recognitions or they just engage in posturing.

“[Ken Ofori-Atta] must also be a bit more humble and admit that the domestic programmes are not going well as they said it would. Some of that will be acknowledgement of revenue handles that they are talking about and their performance. Where I will be most interested in whether or not it is sufficiently candid is admitting that some of these policy restrictions that were fiercely resisted are also having negative effect, not just they are underfurrowing.

“We will be looking to see whether the government recognizes at this stage that it is beginning to lose credibility as being capable of taking these decisions in good faith or simply posturing.

“I think that is the biggest issue facing the government now. If investors get the view that they are just posturing, they don’t tend to do things fundamentally different, they will not be able to achieve their most important policy objectives right now which is to reduce the cost of our debt. If they don’t bring down the international rate it will affect everything else. This 20 per cent yield, 22 per cent yield moving to 25 per cent yield is moving the country aggressively towards a duration where we have a default,” he said.

A Financial Analyst and Chief Operations Officer at the Dalex Finance, Mr Joe Jackson also asked the government to cut spending on some programmes especially the feeding component of the free Senior High School (SHS) programme.

In his view, times are hard, the country is broke therefore, critical decisions ought to be taken by managers of the economy to look at ways to cut expenditure.

“Is this what we want to spend our money in the such difficult times on? These are hard times, there are hard decisions to be taken and one of the things we must realize is that Ghana is broke.”

This has led to the country heading to go to the International Monetary Fund for support.

Accordingly, a staff team led by Carlo Sdralevich arrived in Ghana on July 6 to engage the government of Ghana. The team concluded its initial work on Wednesday July 13.

They also met with the Parliament’s Finance Committee, civil society organizations, and development partners, including UNICEF and the World Bank to engage on social spending.

At the conclusion of the mission, Mr. Sdralevich issued the following statement said Ghana is facing a challenging economic and social situation amid an increasingly difficult global environment.

“In addition, the global economic shock caused by the war in Ukraine is hitting Ghana at a time when the country is still recovering from the Covid-19 pandemic shock and with limited room for maneuver. These adverse developments have contributed to slowing economic growth, accumulation of unpaid bills, a large exchange rate depreciation, and a surge in inflation.

“The IMF team held initial discussions on a comprehensive reform package to restore macroeconomic stability and anchor debt sustainability. The team made progress in assessing the economic situation and identifying policy priorities in the near term,” the IMF said.

It added “The discussions focused on improving fiscal balances in a sustainable way while protecting the vulnerable and poor; ensuring credibility of the monetary policy and exchange rate regimes; preserving financial sector stability; and designing reforms to enhance growth, create jobs, and strengthen governance.

“We reaffirm our commitment to support Ghana at this difficult time, consistent with the IMF’s policies.

“Staff express their gratitude to the authorities, civil society, and development partners for their constructive engagement and support during the mission.”

The Government of Ghana on Friday July 1 announced that it was seeking support from the IMF.

This followed a telephone conversation between the President and the IMF Managing Director, Miss Kristalina Georgieva, conveying Ghana’s decision to engage with the Fund, a statement by the Ministry of Information noted.

Bloomberg’s study has ranked Ghana 2nd among countries with the highest debt default risk in 2022.The country closely follows El Salvador (ranked number one) in the Sovereign Debt Vulnerability Ranking. Ghana’s debt to Gross Domestic Product (GDP), according to Bloomberg, is estimated at 84.6%by the end of this year.

This indicates that the nation’s debt would have surpassed ¢400 billion by far before the end of 2022.

As of the first quarter of 2021, Ghana’s public debt had hit ¢391 billion (US$50.3 billion), the Bank of Ghana reported. As much as ¢40.1 billion was added to the debt stock, largely as a result of exchange rate fluctuation.

Together with Brazil, Ghana’s interest expense to GDP is projected to hit 7.2% in 2022, the highest among the 25 countries, captured by Bloomberg.

Ghana ranked 2nd among countries with highest debt default risk in 2022 by Bloomberg
This means the two countries will spend more money to service their debts in 2022.

Already, the International Monetary Fund has cautioned that more than 30% of emerging and developing countries are at or near debt distress, with 60% from developing economies.

According to Bloomberg, Tunisia with a debt-to-GDP ratio of 87.3% is ranked 3rd among countries that are in the risk of debt default.

Ghana’s situation prior to announcement by the government to seek IMF bailout was precarious as investors had perceived the Ghanaian economy as risky, therefore escalating the yield on Ghana’s Eurobonds.

However, since the announcement by the government to seek economic support from the Fund, calm has returned to the markets as interest rates have remained relatively stable, though there are still some concerns about the foreign exchange market.

Domestic interest payments accounted for 82.7% of the total interest payments in the first quarter of 2022. According to the May 2022 Monetary Policy Report by the Bank of Ghana, external interest payments constituted the remaining 17.3%. In all, total Interest Payments amounted to ¢10.608.billion over the review period, higher than the envisioned target.

In this article:- Bright Simons to Ofori-Atta,Admit VAT,e-levy and corporate tax aren't working