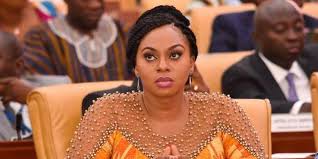 It has emerged that Dome-Kwabenya Member of Parliament has been absent herself from the lawmaking house for fifteen (15) days.

According to law and Standing Orders of Parliament, an MP who has absented him/herself from parliamentary duties for 15 days without permission in writing must be brought to the attention of the Speaker and accordingly referred to the Privileges Committee, a situation that could led to declaration of the seat vacant to pave ways for bye-election.

In a sharp reaction, Executive Secretary of Parliamentary Network Africa Samuel Obeng said “The Speaker of Parliament must remain firm in taking decision on Dome-Kwabenya MP Adwoa Safo. The majority must be mindful of the fact that his constituents have not been represented in parliament for 15 days and must allow the punishment prescribed by law for 25 days absence”.

Meanwhile, some Members of the Minority caucus in Parliament have questioned the absence of the controversial Electronic Transfer levy from the Business Statement for the fifth week ending February 25, 2022.

This comes days after the leadership of the Majority in Parliament disclosed that the government will no longer withdraw and re-lay the E-levy bill, as earlier communicated.

The Member of Parliament for Ellembelle, Emmanuel Armah Kofi Buah asked the Majority to declare its stance on the levy to clarify any misconception.

“It [E-levy] is not even in our business statement this week. We want to know the direction of government on that E-levy policy. If it is no longer a priority, please let us know”.

Member of Parliament for Juaboso, Kwabena Mintah Akandoh, also made a similar call in Parliament, saying “May I know when the E-levy [bill] will be brought back to the floor of the House? I say that because some members of the honourable House are going round telling Ghanaians that some of us are secretly supporting E-levy”.

Reacting to the concerns, the Deputy Majority Leader, Alexander Afenyo-Markin, urged the Minority to build consensus with the majority in passing the e-levy bill.

“…Yesterday we considered the Sputnik report by consensus. Why don’t we do same for the e-levy?”

Previous efforts to discuss the bill on the floor of Parliament have not materialized.

Currently, the national conversation has been around the government pushing through the controversial 1.75% electronic transfer levy estimated to rake in some $1 billion annually or sign up on the IMF program.

Some analysts have proposed seeking an IMF bailout as a better alternative amidst public disapproval of the E-levy, but the government has said it will have none of that.

Others have also brushed off calls for the government to go under an IMF programme insisting that the options left for Ghana to consider are fiscal discipline, a reduction in wasteful expenditure, and the sealing of revenue leakages.