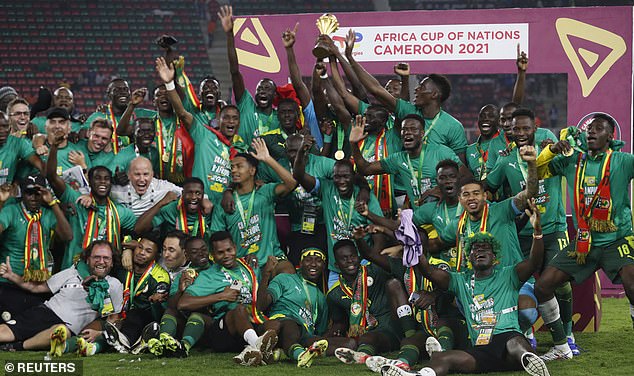 AFCON 2021: Historic win for Senegal in final against Egypt

After two hours of efforts and goal-scoring opportunities, Senegal won the 2021 Africa Cup of Nations in the Olembé stadium of Yaoundé. As they face 7-time champion Egypt, the Teranga Lions didn’t surrender.

Senegal’s players celebrate with trophy after winning the African Cup of Nations 2022 final soccer match between Senegal and Egypt at the Ahmadou Ahidjo stadium in capital Yaounde, Cameroon.

The men of Aliou Cissé beats Egypt on Sunday, February 6 with a 4-2 win in the penalty shoot-out. In the Olembé stadium of Yaoundé, the Teranga Lions gained the upper hand on the Pharaohs of Mo Salah.

This victory crowns an entire tournament for Mané’s teammates. Starting in the 4th minute, Mohamed Abou Gabal, the Egyptian goalkeeper, made a save. This missed penalty did not get the fingers of the Senegalese burnt. Despite a 57% ball possession Senegalese faced a phenomenal Egyptian goalkeeper.

Tied 0-0 by the end of the second half, the two teams had to come back on the pitch. During extra-time goal-scoring chances on both sides didn’t turned into actual goals.

The penalty shoot-out eventually settled the squads. With two miss from the penalty spot, Egypt lost to the Senegal.

Read latest updates from the Africa Cup of Nations final won by Senegal:

In this article:AFCON 2021:,Historic win for Senegal,in final against Egypt