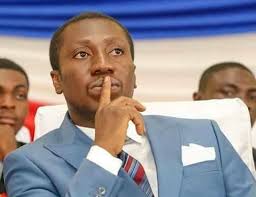 Deputy Majority Leader and Effutu Member of Parliament Alexander Afenyo Markin has eaten the humble pie, pleading for forgiveness after he attributed tidal waves devastation at Keta, Anloga and others areas in the Volta to sand-winning activities during which he displayed a picture to back his claim at a press conference in the full glare of the public, accusing minority of being economical with the truth but are in hurry to bury the cause of the storm surge to score political points.

A thorough scrutiny revealed that the source of the said picture is Sierra Leone and not the Volta Region with many decribing the Effutu Lawmaker’s action as perverse, awkward with little or no bases, resulting in total untruthful.

In his attempt to do the damage control, after peddling false in public, the Effutu. MP said “I apologise to Ghanaians and the people of Keta, It happened that the picture I used was not from the Volta Region. I apologise to all”.

There was confusion and a near chaotic scenes in Parliament today between Majority and Minority over sand-winning allegations by Deputy Majority Leader and Effutu MP Alexander Afenyo Markin.

The confusion resulting in a clash between NPP and NDC MPs took place after Afenyo Markin accused the Volta Regional MPs of being economical with the truth and failed to trumpet the fact that the Keta residents are hit with tidal waves because of their sand-winning activities.

In view of this, Majority MPs led by Afenyo Markin questioned why the Volta caucus MPs are silent on sand winning activities within Keta Beach.

The latest fisticuffs between Majority and Minority Caucuses where the MP for South Dayi Rockson-Nelson Dafeamekpor and Effutu MP Afenyo Markin threw caution to the wind, is as a result the tidal wave disaster at Keta area, displacing residents of Keta, Anglo and Ketu South.

The Volta caucus MPs led by Dafeamekpor who were not enthused by the remaks from Afenyo Markin to blame the already affected residents on a rather national matter expressed dismay over government’s dragging of feet at long-existing uncompleted sea defence project.

In a sharp rebuttal at a press conference in Parliament, Deputy Majority Leader and Effutu MP Afenyo Markin questioned why the minority MPs are only trumpeting the uncompleted sea defence project to put government in the bad lights when sand-winning activities are being engaged in by the residents.

The remarks broke confusion and a near chaotic scenes typically characterised by war of words between Minority led by Dafeamekpor and Nhyiaso Member of parliament.

Meanwhile, Dafeamekpor who claimed to have his feet on the ground said “Keta disaster cannot be attributed to sand-winning activities”.

According to him, “it was an attempt by a failed government led by Afenyo Markin who is unable to show competent and decisive leadership in the face of a calamity”.

The tidal wave in Ketu South, Keta and Anloga area has led to destruction of Fuveme Basic School and other residential properties.