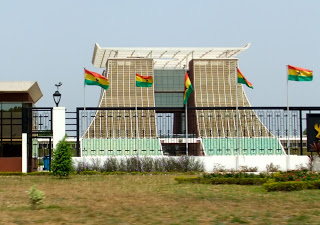 Not quite finished yet. Very impressive.

Afrobarometer report released by the Ghana Centre for Democratic Development (CDD-Ghana) on Tuesday July 26 placed the Office of the Presidency second on the list of institutions or offices perceived to be corrupt.

The Police was first, according to the survey.

Commenting on this report, the Director-General of the Internal Audit Agency, Dr Eric Oduro Osae called for strict application of anti-corruption laws in the country as part of the fight against the menace.

In his view, application of the law marks the first major step in winning the fight against the practice.

Dr Oduro-Osae was speaking on the Ghana Tonight Show with Alfred Ocansey on TV3 on Tuesday July 26.

“we should double or efforts in fighting corruption. A lot of people still don’t understand the intricacies of corruption and its impact. It also tells me that a lot of education is needed. It is a wake up call for us to double our efforts towards the fight against corruption.”

In this article:Afrobarometer report:,Police,presidency most corrupt public institutions in Ghana