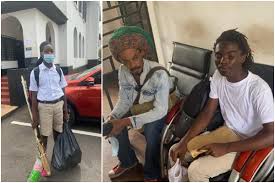 Attorney General Godfred Yeboah Dame has filed appeal processes to challenged the earlier judgement in favour of Rasta students against Achimota School by the High Court.

Tyrone Marhguy and Oheneba Kwaku Nkrabea dragged Achimota School to court after they were asked to remove their dreadlocks before they are granted admission.

The court held that the Attorney-General failed to produce sufficient grounds on which the court must uphold Achimota School’s decision to deny Rastafarian students admission due to their dreadlocks.

In their appeal before the court, Achimota School and Attorney-General’s office said the court among others erred when it gave verdict that undermine Achimota School’s guidelines to instil proper behavioural patterns among students.

The school is, subsequently, imploring the Appeals Court to set the whole judgment that orders it to admit the dreadlocks students.

The school additionally need the court to compel the two Rasta students to follow the school rules and guideline assuming they need to keep tutoring at the establishment.