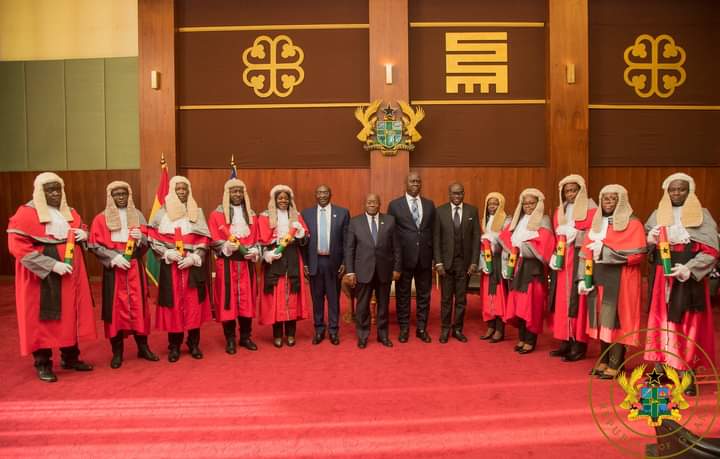 President Akufo-Addo has inducted into office 10 Justices of the High Court.

It is the fifth time the President has inducted Justices of the High Court.

According to President Akufo-Addo, “They [Justices] are eminently fit and qualified for the position of Justices of the High Court, and have the impartiality of mind and independence of spirit necessary to hold this high office.”

He noted that “I also indicated in my speech that Government, through the Administrator of the District Assembly Common Fund, is constructing one hundred (100) new courts and bungalows for Judges in all sixteen (16) Regions of the country. Sixty percent (60%) of these courts and bungalows have been completed, and will be commissioned before the start of the legal year in October”.

“Three (Ahafo, Bono East and Oti Regions) out of six new High Courts, which are being constructed for the six new Regions will be completed and ready for commissioning, again, before October. A new, modern Court of Appeal complex in Kumasi, together with twenty (20) townhouses and a guesthouse to serve as permanent residences for Court of Appeal Judges based in Kumasi, will be completed and commissioned in September”.

“In addition to these, two hundred and ten (210) vehicles were, earlier this year, distributed to all judges in the Supreme Court, Court of Appeal, High Courts and Lower Courts”.

“These are all initiatives being undertaken by Government to strengthen the capacity of the Judiciary”.

In this article:10 High Court Justices,Akufo-Addo,swears in