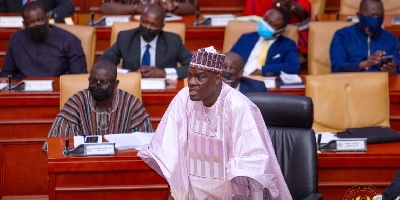 “We’ll resist any attempt by Akufo-Addo government to use the court to tilth the balance of power, reduce numerical strength of NDC Caucus in parliament. Any attempt by Akufo-Addo government, the police and the Attorney General to prosecute Assin North Member of Parliament James Joe Gyekye Quayson pending the determination of the the matter at the High Court is prejudicial and contemptuous, and will cause the the grave danger to our multi-party democracy. We’re not coward, we’ll oppose E-levy Bill, we won’t accept e-levy, it’s simple”, Minority Leader Haruna Iddrisu said at a press conference today.

Assin North Member of Parliament James Joe Gyekye Quayson has been slapped with 5 new charges by the state today.

But, the Minority Caucus of Ghana’s Parliament said the move is a crude strategy by Akufo-Addo Administration to reduce numerical strength of Opposition in parliament, intended to pass the controversial E-levy Bill into law.

According to Haruna Iddrisu, “Any attempt to prosecute to is prejudicial and contempt of court. Akufo-Akufo government is acting in bad fate to gain undue advantage in parliament”.

He noted that “We are standing on principle that we remain resolute in our opposition to the E-levy Bill. We are not afraid by despotic Akufo-Addo’s crude tactics. We pray that they will not use the court to tilth the balance of power”.