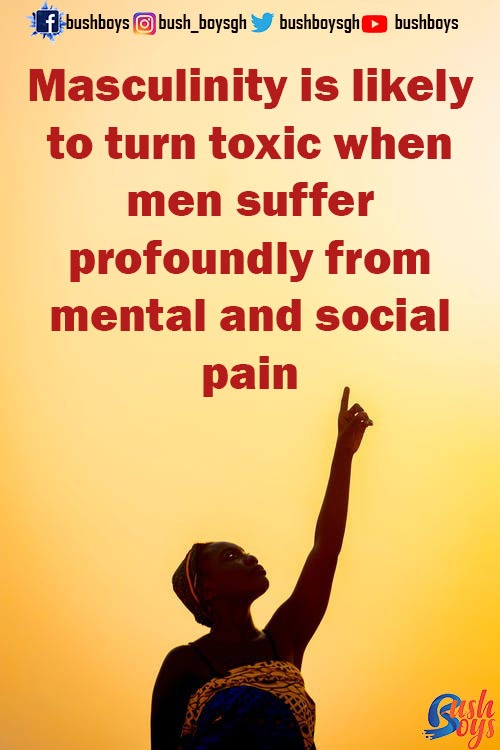 Who would have thought that after so many years of campaigns and policies on woman empowerment so that there would be a level playing field for both men and women in all aspects of life, one day the male species would be endangered?

A Ghanaian researcher named Isaac Dery says MASCULINITY IS LIKELY TO TURN TOXIC WHEN MEN SUFFER PROFOUNDLY FROM MENTAL AND SOCIAL PAIN.
Honwana also said “YOUNG MEN IN GHANA ARE UNFAIRLY TRAPPED IN A ZONE OF SOCIAL LIMBO WITH VERY LIMITED PROSPECTS FOR THE PRESENT AND FUTURE”.

You may want to read more on their work in the following articles: “Who knows, you may overpower him”: narratives and experiences of masculinities among the dagaaba youth of Northwestern Ghana” and “To be a Man is not Easy”: Everyday Economic Marginality and Configurations of Masculinity among Rural Ghanaian Youth”
BUSH BOYS MALE IDENTITY TV SHOW produced by Ami Pictures is creating a male identity: changing the negatives into positives.

The 5 segmented talk show is also changing the stereotyped narratives about men believing that men must also be empowered to understand women and their empowerment.
In the premiere episode titled, WHAT MAKES A MAN, A MAN; WHO IS A MAN? Host, Big Papa explores with his guests Nana Kantinka (a performing artist) and Bright ‘KVRL MARX’ Elorm (an entrepreneur) their own understanding of the social constructions of who or what a man is.
The host and his two other “Bush Boys” (meaning gentlemen- oxymoronically speaking) also discuss some adjectives used to describe men: ‘monsters, he-goat, cheats, thirsty vampires’ etcetera.
In one of the segments, LET’S PLAY A GAME SEGEMENT, these stereotypical adjectives are diffused and corrected through an interesting and hilarious game of rapid questions.

There are other exciting segments of the show like SHARE YOUR BROKEN HEART STORY, HOW TO BE A BUSH BOY, CLIMATE CHANGE CAMPAIGN and WEIRDOs.

In this article:Ami Pictures releases full,BUSH BOYS,episodes of only male identity TV show in Ghana: