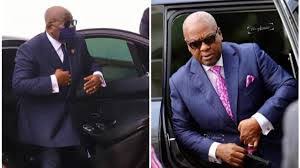 Former President John Dramani Mahama has expressed deepest condolences to the families of victims Apiate explosion near Bogoso in the Western Region, asking all and sundry to pray for speedy recovery of victims.

Ghana on Thursday 20 January 2022 woke up to the tragic news of a dynamite explosion at after a truck filed with explosives clashed with a motorcycle. Priliminary investigations revealed 17 persons are dead with 59 who sustained various degrees of injuries were admitted hospital. Apart from that a lot of property were destroyed rendering residents homeless, creating traffic and halting vehicular movements.

African Editors’ sources have confirmed that the truck belonging to Maxam Company contracted by the Chirano Mines operating at Ghana’s biggest mining and oil region loaded with explosives clashed with a motorcycle.

Reacting to the news, Former President John Mahama said “A truly sad day for Ghana!
My deepest condolences to the families of the victims of the unfortunate disaster at Appiatse, in the Bogoso District of the Western Region this afternoon”.

John Mahama noted that” let’s pray for the speedy recovery of the injured, as we also urge the security and emergency services to continue to work assiduously to alleviate the damage and suffering in the affected communities”.

“To the chiefs and people in the affected areas, the National Democratic Congress (NDC) and the country stand with you, in this time of grief”, the NDC 2020 Election Flagbearer expressed.

President Akufo-Addo whilst expressing condolences to the families of the victims, tasked Ghana Armed Forces, National Disaster Management Organization (NADMO) to take urgent steps to contain the situation and proved reliefs to the victims.

Meanwhile, Deputy Minister of Lands and Natural Resources and Member of Parliament forr the area Mireku Duker said “Government will set up a committee to probe Apiate explosion and legally nail persons found to have breached Ghana’s laws on transporting explosives”.

African Editors gathered that some voluntary blood donors have opted to donate blood to save lives of Apiate explosion victims.