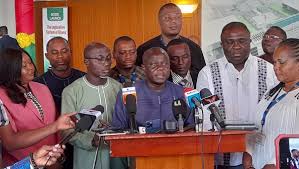 Ashanti MPs to meet Akufo-Addo over lack of development

Ghana’s Members of Parliament (MPs) from the Ashanti Region on the ticket of the governing New Patriotic Party (NPP) are seeking an emergency meeting with President Nana Addo Dankwa Akufo-Addo over what they deem to be the lack of development in the region, attracting growing anger from constituents, a situation that has the tendency of igniting a full-blown chaotic scences against lawmakers leading to unmanageable proportions.

The Ashanti Caucus of the NPP says the region is lagging in infrastructure and other amenities after years of voting for the NPP, forcing constituents to attack and issue threats, to the extent that some NPP MPs are afraid of returning to their various constituencies.

Mr Antwi, who is also the MP for the Asante Akim Central Constituency, made this demand in an interview with the Parliamentary Press Corps on Thursday, July 21, 2022, in reaction to the pelting of Suame MP Osei Kyei-Mensah-Bonsu with sachet water by some of his constituents during a tour of some stalled road projects in that constituency.

“The roads within Kwabre East are very bad and there are constituencies like Manso Adobea, Nkwanta, Bantama, Kwadaso … Asante Akyem North and South, so, virtually, all the constituencies have some concerns over roads,” he said.

According to Mr Anyimadu Antwi, the Ashanti MPs believe that if road projects in the region are completed, constituents’ trust in the government will increase.

He added that the leadership of the Ashanti Caucus will also raise other issues of concern such as electricity extension in the region in due time.

Ghana’s Suame MP, Majority and Minister for Parliamentary Affairs Osei-Kyei-Mensah Bonsu was chased out by constituents upon visit characterised by throwing of sachet water, demonstrations with many running riot over broken promises and lack of development in the region.

Apart from him, NPP MP for Abuakwa South Samuel Atta-Akyea was also chased away from his consitituency by angry residents this year in the run-up to the passage of controversial e-Levy bill into law.