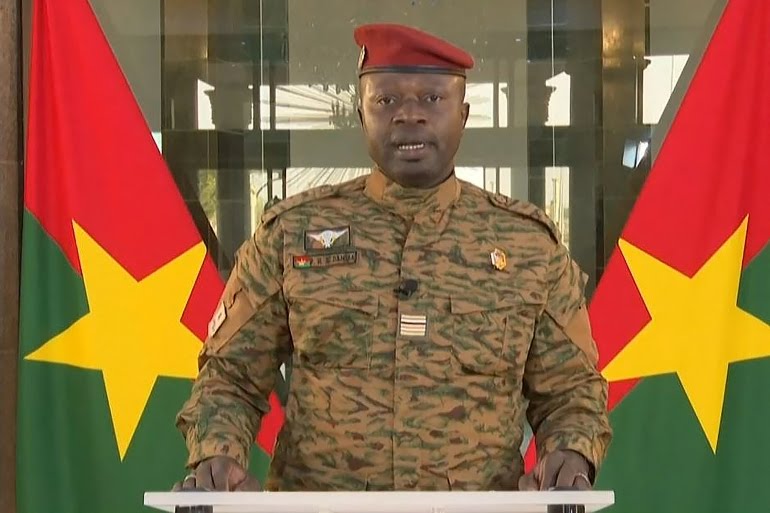 Military restored constitution suspended after takeover and appointed Leader of the junta Paul-Henri Sandaogo Damiba as the Interim President.

Both Africa Union and ECOWAS condemned the coup and suspended B. Faso.

Burkina Faso’s military government said it has restored the constitution a week after taking power and has appointed the coup’s leader as head of state for a transitional period.

The move came shortly after the African Union (AU) suspended Burkina Faso for the takeover and diplomats from West Africa and the United Nations pressed demands for a return to civilian rule.

In a statement read on television on Monday, the military government announced it had approved a “fundamental act” that “lifts the suspension of the constitution”, a move that had been declared after the January 24 coup.

The 37-article document guarantees independence of the judiciary and presumption of innocence, as well as basic liberties spelled out in the constitution such as freedom of movement and freedom of speech, according to the statement.

Under the “fundamental act”, it said, the military government – officially named the Patriotic Movement for Preservation and Restoration (MPSR) – “ensures the continuity of the state pending the establishment of transitional bodies”.

The statement did not give a timeline for the transition period.

This role also encompasses “president of Burkina Faso, Head of state (and) Supreme Leader of the armed forces”, the statement said.

The MPSR has two vice presidents, the statement added, but it did not mention any names.

A separate decree read on television said that the armed forces chief of staff, Gilbert Ouedraogo, was leaving the job.

Just hours earlier, the AU’s 15-member Peace and Security Council said on Twitter that it had voted “to suspend the participation of #BurkinaFaso in all AU activities until the effective restoration of constitutional order in the country”.