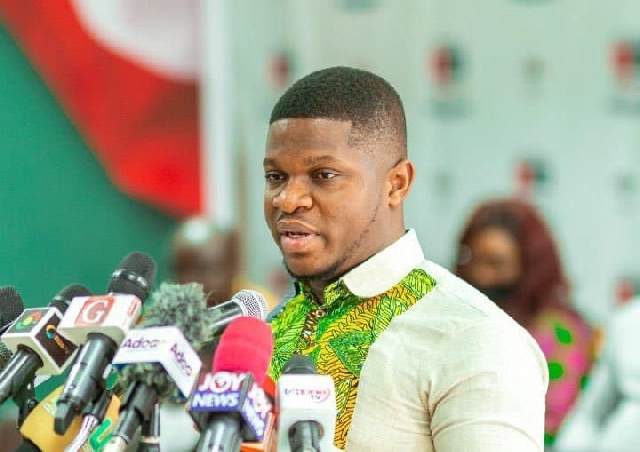 “Akufo-Addo-Bawumia-led Administration is reversing the benchmark value discounts at the ports because it is broke and seeking to raise money through the U-turn solely to acquire credibility in the international markets to enable them continue to borrow more”, Ghana’s biggest opposition party , NDC has revealed at a press conference today.

The reversal was recently announced by the Ghana Revenue Authority and billed to have taken effect from Tuesday, 4 January 2022. The reversal of the discounts affects 43 items.

Demonstrating how the decision would affect importers and the ordinary Ghanaian, the biggest opposition party told journalists at a press conference on Wednesday, 5 January 2022 that the “discounts, which were announced, was not a favour the government was doing to importers”.

National Communications Officer Sammy Gyamfi explained: “It was because they had introduced a policy which had led to an increase in import duties and, so, if you are reversing the discounts, what it means is that you are sending importers back to where they were when the benchmark values were first introduced and import duties went up”.

“But that is not all: what is even worse is that at the time of John Mahama where there were no benchmark values or let me even bring it forward to 2019, May, where there were no benchmark values, the dollar was just about GHS5 [but] today the dollar is GHS6.40 and, so, if you are reversing the policy, you are sending the importer back to that place where he was paying high import duty as a result of the introduction of the benchmark values and now he’ll be worse off because if he needed GHS5.20 to get a dollar back then in 2019, now he needs GHS6.50”.

“And aside from that, back then, importers were not paying anything like COVID levy on NHIL or COVID levy on VAT and all the new draconian crippling taxes this government has introduced”, he noted.

Mr Gyamfi added: “So, as a result of all the taxes the government has introduced since April 2019 when this policy was announced, and the depreciation of the cedi; reversing the benchmark value discount will make importers and for that matter, Ghanaians in general, worse off”.

This “catastrophic” decision, the NDC noted, “has been occasioned by the self-inflicted economic malaise we presently find ourselves in with our economy in tatters and the government simply unable to find money to do anything”.

In his view, “after five years of economic mismanagement and reckless election-driven spending, which have taken the country back to its HIPC days, the Akufo-Addo-Bawumia NPP government has decided to punish the already-burdened Ghanaian people with more hardships for their own recklessness and economic mismanagement”.

“This is why all manner of crippling taxes and killer measures such as the reversal of benchmark value discounts are being imposed on suffering Ghanaians to shore up the government’s revenue just to create an artificial picture of a sound economy in order to convince the investor community of more and more borrowing”, he stressed.

He urged Ghanaians not to accept any explanation the government might give to justify the decision except what the NDC suspects to be the case.

“So, don’t be deceived that this policy has been introduced because the government wants to support the AGI and local manufacturers. It is not true”, he said.

“The reason for the introduction of this draconian policy is revenue and nothing more. The government is broke. They’ve wasted all the money that have accrued to them – unprecedented resources wasted – and now they want to collect more from us even though they know times are tough”, Mr Gyamfi indicated.

The decision, according to the NDC, portrays Vice-President Dr Mahamudu Bawumia as a dishonest politician.

“We, in the NDC, are left in no doubt whatsoever that this latest decision by the government to reverse discounts of benchmark values on imported goods further accentuates Dr Bawumia’s place as the most deceitful political actor in Ghana’s history”.

“It will be recalled that some time in 2019, this deceitful politician, Dr Bawumia, was all over the place pontificating that Ghana’s ports were one of the most expensive in the sub-region and that the government had decided to introduce discounted benchmark values in order to cushion the Ghanaian in order to facilitate more trade volumes in order to make our ports more competitive and reduce smuggling and increase government’s revenue from the ports”, he recalled.